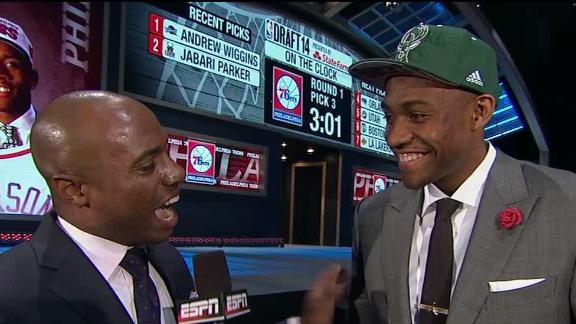 ST. FRANCIS, Wis. -- The Milwaukee Bucks selected Duke forward Jabari Parker with the second overall pick in the NBA draft Thursday night, a pivotal selection for a team in transition.

The one-and-done star immediately becomes a face for an organization with new ownership seeking to invigorate its fan base following a franchise-worst 67-loss season. The 6-foot-8 Parker has been lauded for his maturity and offensive skills. He would join 19-year-old forward Giannis Antetokounmpo and scoring guard Brandon Knight as promising team cornerstones.

The Bucks were considering Andrew Wiggins as well, but the Cleveland Cavaliers made their decision much easier after taking the Kansas star with the top overall pick.

There were no last-second trade offers, general John Hammond said, though it appears the Bucks weren't going to make any deals anyway unless it was really overwhelming.

"We were fairly assured that this is exactly what we needed to do," Hammond said. "I feel even more so after it's done."

Paker is one of three freshman in the last 15 seasons to average at least 19 points and eight rebounds per game while shooting 35 percent from beyond the arc, according to ESPN's Stats & Information. Kevin Durant and Michael Beasley were the other two.

Hammond likes Parker for his ability to fit into multiple positions in the frontcourt.

"He's a matchup problem," Hammond said. "He can create a shot for himself, can also go into the post and put his back to the basket."

Defense, though, figures to be a work in progress. Hammond said Parker had quick feet for a big man, and noted that Parker figures to benefit from having to guard centers at times at Duke.

Regardless, Parker figures to have an easy transition in Milwaukee. He's from nearby Chicago, and former Blue Devils assistant Steve Wojciechowski is now head coach at Marquette.

The Bucks had three more picks in the second round. The new additions will arrive in Milwaukee just as New York investment firm executives Marc Lasry and Wesley Edens take over as owners.

Lasry and Wesley Edens bought the Bucks for $550 million this spring from former U.S. Sen Herb Kohl, who wasn't fond of using the word "rebuilding."

But that seemingly left the team without a clear, long-term philosophy in recent years. The Bucks have drafted relatively well under Hammond, though some veteran signings haven't panned out. The new owners have said they hope to build a championship contender within three to five years, about the same time frame in which they hope to build a new arena.

That makes this draft especially important for the Bucks. Parker will be relied on to add scoring punch as well as help put fans in the seats.

"He's as offensively gifted a player that I've been around at Duke," Wojciechowski said this week. "His instincts for scoring are unique, his size, his mobility his skill set -- offensively, I see a guy who's going to be a 20-point-a-game scorer in the NBA for a long time."

Bucks Draft Parker No. 2
The Milwaukee Bucks selected Duke forward Jabari Parker with the No. 2 pick.