Bulls not afraid of Cavs in series 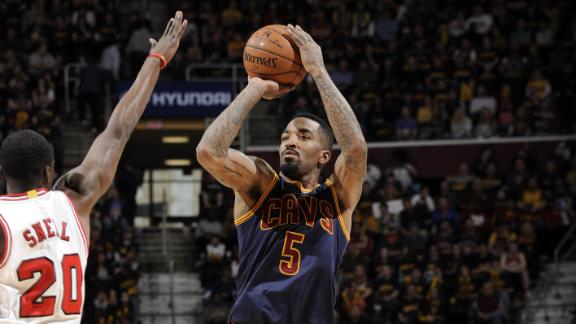 CLEVELAND -- Joakim Noah and the Chicago Bulls remain confident they can beat the Cleveland Cavaliers in a seven-game series -- even though they dropped Sunday's game 99-94 to the Cavs.


"I think we're a confident group," Noah said after the game. "And it would be great to play them in the playoffs. It would be very, very exciting, something that I really hope happens."


Noah, who famously disparaged the city of Cleveland during the 2010 playoffs, showed the city a similar lack of regard during his postgame comments.


Cavs guard J.R. Smith, who was traded to Cleveland before the trade deadline, echoed Noah's sentiments in an interview with NBA.com's David Aldridge earlier in the year.


The Bulls are 1-3 against the Cavs in the regular season, but they have the highest-scoring offense in the Tom Thibodeau era. The Cavaliers hit 16 3-pointers on Sunday, tying a record for 3-pointers given up in a game with Thibodeau as coach.


Even so, the Bulls seemed upbeat after the loss and remain confident they will be even better once Derrick Rose and Kirk Hinrich return from knee injuries.


"Look, there's no moral victories, and we would have liked to have played better," Bulls veteran Mike Dunleavy said. "But you lose a game by five and you have three, take your hat off to them, great shots at the end, buzzer-beaters. Hey, if they hit those shots, they're going to beat a lot of teams.

"We still think we can do some things better, but if we have the opportunity to play them down the road, we feel like we can play with them."


Since 2010, the Bulls are just 3-12 in the playoffs against LeBron James during his first run in Cleveland and two series while he was a member of the Miami Heat, but they believe they have enough to beat James and the Cavs this time around and say they want to see James in the playoffs.


The trash talking that has become a staple between James and Noah was on display again Sunday, with Noah committing a hard foul on James, much to the dismay of the Cleveland fans.


"Why not?" Bulls guard Jimmy Butler said. "I think you got to go through them anyways. I think they're probably the favorite to come out of here anyway, so if we want to change that, then I think we're going to have to be the ones that beat them."

What makes the Bulls so confident they can beat the Cavs?


"I think because we know how to fix what we did," Butler said. "We gave away some easy baskets, and things that we talked about we were going to do in the scouting report before the game we didn't execute the way that we wanted to, so we're very confident [in] the group of guys that we have, and on top of everything else, I don't think anybody in this locker room wants to go home early, let alone play to lose."


Noah wouldn't bite when asked where he believed the Bulls have an advantage over the Cavs, but he has remained optimistic all season that his team was finally poised to take down James.


"Where do we have an advantage?" Noah said. "I'm not sure. I'm not sure. But you don't want to skip steps. We know these next five, six games are very important for us. We just have to get better as a team.