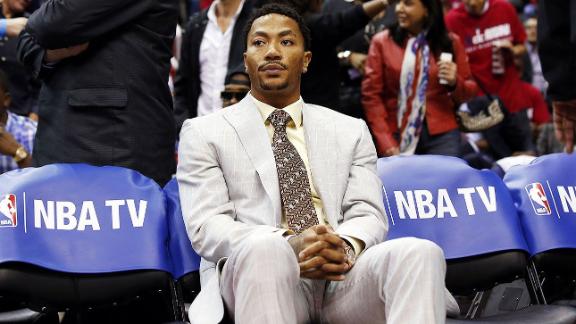 DEERFIELD, Ill. -- The Chicago Bulls say they are not concerned about Derrick Rose's health status being an obstacle in any potential recruiting pitch they make to prospective free agents over the coming weeks.

Rose, a former league MVP, has only played in 50 games the past three seasons because of various injuries, including two major knee surgeries. Aside from financial terms, Rose's status figures to be a hot topic as the Bulls are expected to meet with New York Knicks small forward Carmelo Anthony, among others, once the free agency period begins at 12:01 a.m. ET on July 1.

Bulls coach Tom Thibodeau does not believe Rose's status will be a major issue for his team when talking to free agents.

"Not really," Thibodeau said during ESPN 1000's NBA draft show on Thursday night. "In the NBA, injuries are part of it. And most guys go through a period in their own career when they're injured. It's adversity that you have to get past and get over and most of these guys have done that, so I don't think that's going to be a big deal. I think they're going to see Derrick and they're going to know that he is healthy."

"I think it depends on each individual and what they're looking for," Forman said. "But I know the guys that are serious about wanting to compete at a high level, I would hope would take a hard look at our situation because of the type of players we have.

"Not only how talented they are, but how they approach it each and every day. And playing for a coach like Tom and a staff like he has, that's serious and determined to become champions."

Both Thibodeau and Forman remain hopeful that Rose will be able to stay healthy throughout next season. Forman noted that Rose, who is slated to practice with the Bulls' summer league team, is playing 5-on-5 ball and has been "aggressive" in his rehab.

"He's doing well," Thibodeau said. "He's picked up the intensity in his workouts. His drill work has been outstanding. And then he's preparing right now to practice with our summer league team. That will be the next step and then the step after that, which will be very helpful for him and helpful for us to give us a pretty good read of where he is when he gets to participate for Team USA.

"So he's moving along well, he's right where he should be and then we'll see where he is once we start those practices."

Rose is expected to head to Las Vegas at the end of next month to compete for a spot on Team USA's World Cup of Basketball squad. Thibodeau, an assistant on Team USA under Mike Krzyzewski, believes the time with the national team will be great for Rose.

"His last experience with Team USA I thought was very helpful for him," Thibodeau said. "In terms of readiness for the season -- and that was his MVP year. So I think there is a great benefit, particularly in this situation where he's been off for so long. It will let him know where he is also. But from what I've seen thus far I think he's going to be ready and I expect him to play well. As long as he feels well, he'll be fine."

As far as the actual recruiting sales pitch goes, Thibodeau is confident the Bulls can sell themselves.

"I think our situation is very attractive when you look at the players that we have," Thibodeau said. "I think the depth of our team and who we are, when you look at, obviously, Derrick being back is huge for us. But also where Joakim [Noah] is and Taj [Gibson], and you look at a Mike Dunleavy and now a Doug [McDermott]. We're going to have good quality depth so I think that part makes it very attractive and you look at what our team has done and we feel if you're looking for a place to play this is as good as any. It's a great city, great organization.

"So we're excited for the opportunity to talk to some people."

The depth that Thibodeau speaks of may take a major hit depending on how much money the Bulls have to use to lure a player like Anthony, or others, to Chicago. Still, the Bulls believe they have built the type of culture that players want to be a part of around the league.

Of course, what would be most attractive for the Bulls is being able to sell Rose's clean bill of health. Since nobody knows how his body will respond after being out for so long, the Bulls have to sell hope on a certain level.

Both Thibodeau and Forman were non-committal when it came to the possibility of Rose himself being part of the recruiting pitch. The 25-year-old has said multiple times that he doesn't feel comfortable recruiting other players.

"I think we're selling all our players," Thibodeau said. "And they're selling themselves. They're going to communicate with each other and so they're all going to be part of the process."

Thibodeau did acknowledge that popular center Noah may be a bigger part of the process than most of his teammates. Noah enjoys the recruiting process, and used to do his own recruiting of prospective basketball and football players while attending the University of Florida.

"I would assume that he might be [part of the pitch]," Thibodeau said with a chuckle.