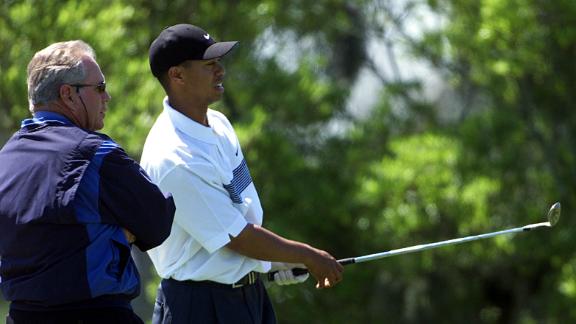 Butch Harmon has had a change of tune -- he would be willing to help struggling former pupil Tiger Woods on a part-time basis to try to get Woods' golf swing back in order, the noted instructor has said in an interview with Golf World.

But Harmon, who last year said he would not be interested in coaching Woods again, said he doesn't expect to be asked for advice because he believes the golfer is likely too proud to seek his help.

"If he wanted, I'd be more than happy to spend a couple of hours and give him my opinion," said Harmon, 71. "I don't think he would ask because it goes against his pride."

Woods and Harmon parted in 2002, after Woods began working with him as a teenager in 1996 and through his most dominant days in golf. Woods won eight majors while with Harmon, including seven in 11 attempts and an unprecedented sweep of them in 2000-01.

Woods, however, has been stuck on 14 majors since the 2008 U.S. Open and said last week his game was not acceptable for tournament golf and that he would not play again until he felt like it was. He has played only two tournaments this year.

"As a fan of great golf, it's hard to watch him pitch the ball now," Harmon said. "You can see it's a total lack of confidence."

Harmon said the 14-time major winner, now ranked No. 66 in the world, is making the right choice by taking a break from the PGA Tour because he needs to get healthy and figure out where to go with his game.

"If I was him, I wouldn't play until I'm healthy," Harmon said. "I know you say you need the tournament reps and all that. Not necessarily. For him, the big thing is the Masters. We know he knows how to play."

Harmon has instructed a number of top golfers, and he annually ranked No. 1 on magazine lists of golf's best teachers before he cut back on how much he works in 2012.

Butch Harmon Willing To Help Tiger
Skip Bayless and Stephen A. Smith discuss Butch Harmon's comments about being willing to sit down with Tiger Woods to try and help him with his game.