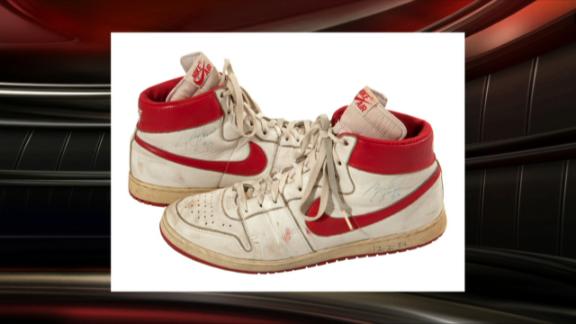 A pair of Nikes that were the earliest NBA-worn shoes of Michael Jordan's that have ever come to market have sold for $71,553.

Terry Melia, a spokesman for SCP Auctions, which sold the shoes, said the buyer wished to remain anonymous.

The shoes sold Saturday were called Air Ships and not Air Jordans.

In December 1984, Jordan had already signed a five-year, $2.5 million deal with Nike, but the Air Jordans weren't ready to go on his feet for every game. So Jordan wore the Air Ships in three different colors before his signature shoe was finished.

The shoes were consigned to the auction house by Khalid Ali, who was a ball boy for the Los Angeles Lakers for the 1984-85 season. Ali originally asked Jordan for the shoes that were on his feet during warm-ups that night at the Great Western Forum -- red, black and white Air Jordans. Jordan, Ali said, switched into the Air Ships for the game, signed those and gave that pair to him instead.

Ali told ESPN.com before the auction that he didn't spend much time looking at or showing the shoes, which stayed in his mother's closet.

The left shoe is size 13 and the right shoe is 13, as Jordan traditionally wore early in his career.

While the Air Jordans became the best-selling signature shoe of all time, the Air Ships faded away. But the shoe model also got lost in the shuffle when Nike's marketing machine pushed the Air Jordan I to the forefront in an ad that claimed the NBA had banned them.

Nike got a letter in February 1985 -- when Jordan was still a month away from playing games in Air Jordans -- signed by NBA deputy commissioner Russ Granik that stated that the red and black shoes Jordan wore "on or around" Oct. 18 violated the uniform code. Despite the marketing that the league banned them, which certainly helped to push pairs to rebellious youth, the Air Jordans actually were never prohibited by the league. The Air Ships were.