California Chrome wins Horse of the Year for second time 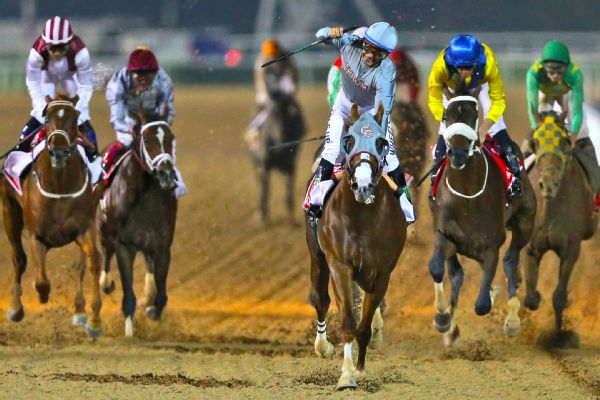 HALLANDALE BEACH, Fla. -- California Chrome has one race left in his career, and he is in such good condition right now that trainer Art Sherman is clamoring for more time with him.

It's easy to see why.

California Chrome was the biggest winner at the Eclipse Awards on Saturday night, taking home three trophies celebrating his accomplishments in 2016 -- including Horse of the Year for the second time. He also won an Eclipse as the best in the older dirt male division, and his victory at the Dubai World Cup was picked as the National Thoroughbred Racing Association's moment of the year.

"It's really an honor," Sherman said. "People don't realize how hard that is to be Horse of the Year, and I appreciate it. It gives me a chance to say, Wow.' I got the Horse of the Year trophy when he won it the last time we were here. It's a gorgeous trophy. This will be another one in my trophy case. It's been filled up pretty good by Chrome, I can tell you that."

California Chrome beat out Arrogate -- who toppled Chrome when they met at the Breeders' Cup Classic -- and Songbird for Horse of the Year. California Chrome is the eighth horse to win that crown multiple times, after also winning in 2014, and joined John Henry as only to do so in non-consecutive years.

Just about every category had an overwhelming consensus in the voting results.

Beholder won her fourth career Eclipse, and is now retired.

"My life will never be the same without her," trainer Richard Mandella said.

Javier Castellano won his fourth consecutive Eclipse as the best jockey, getting 59 percent of the vote to outpace runner-up Mike Smith -- who was in the mix for what would have been his first Eclipse since 1994.

Castellano became just the second jockey to win the award four straight times; Jerry Bailey did it from 2000 through 2003. Castellano was one of four winners who also got an Eclipse last year, alongside Tepin, Beholder and Songbird.

Chad Brown was the overwhelming pick for the Eclipse as top trainer after sheer dominance in turf races and winning the Saratoga training title -- a track just a few miles from his hometown of Mechanicville, New York. Brown got 84 percent of the votes cast, winning the Eclipse for the first time.

"What an honor," Brown said, before thanking his staff.

Luis Ocasio was the runaway winner in the apprentice jockey division. Juddmonte Farms won the Eclipse for the third time as top owner. WinStar Farm got the Eclipse as top breeder for the first time.