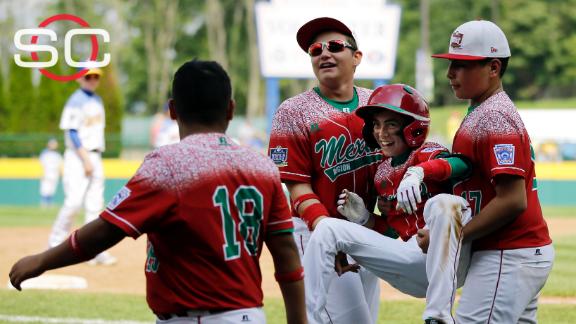 Bonita reached the U.S. Final 4 and will play Bowling Green, Kentucky, on Tuesday in another elimination game.

Bonita overcame a two-run deficit in the third inning. Baptista capped the six-run rally when he drilled a first-pitch fastball out for a 6-2 lead.

Mendez went 3-for-3 and shut down Cranston over the final five innings. Cranston scored two first-inning runs on a Caleb Harris lead-off home run and Cam Ademac RBI single, but Mendez allowed only one more hit and struck out the side in the fourth and sixth innings.

Bonita's Dante Schmid hit a solo homer in the sixth and has homered in all three Series games.

Wei struck out 14 and walked none in a start that included a stretch of eight consecutive strikeouts from the first through third innings. Wei finished at 80 pitches and struck out the side to end the game. He also had two of his team's six hits.

The only Uganda baserunners were Frances Alemo on a first-inning single and Joshua Olara on a fourth-inning hit batsman.

Wei and Cheng Yu Yang also scored twice for Taiwan, which will play Mexico on Tuesday in another elimination game.

Uganda finished 1-2 in the nation's second LLWS appearance. A team from Lugazi played in 2012 but did not win either of its two games before being eliminated.

Mexico scored nine runs in the first inning and eliminated Australia from the Little League World Series by winning 14-3 in four innings Monday.

Armenta finished 3-for-3 with four RBIs. Garcia was 2-for-2. Derik Lopez and Lujano scored twice each. Mexico scored at least once in each inning to end the game via the 10-run mercy rule.

Blake Cavill was 2-for-2 with an RBI for Australia, which finished 1-2 in the country's third year as its own region in the Series. A team from Perth won the nation's first LLWS game in 2014.

Eli Burwash scored the go-ahead run in the bottom of the fifth inning and earned the save as Bowling Green, Kentucky, avoided elimination by beating Taylors, South Carolina, 4-3.

"I've closed out before, but this was the biggest one yet," said Burwash, who said his most recent home run was in regionals.

Ty Bryant earned the win, left after 84 pitches and will be eligible for all of the weekend, should Bowling Green advance that far. Burwash needed only 14 pitches and can pitch again Tuesday.

"Ty pitched outstanding, and it was picture-perfect the way we laid it out," Bowling Green manager Rick Kelley said. "We wanted Eli to close it out and have him for tomorrow, and it worked out perfect."

Should Burwash face Bonita in a save situation, the California players might well turn again to their rally monkey, a red, white, and blue knit puppet with a stars and stripes pattern, something player Walker Lannom credited for the win after an early 2-0 deficit Monday.

"It's our rally monkey. It represents us," Lannom said. "We're a team, but we need something to represent us, and that's the rally monkey."

Emmanuel Rodriguez hit two home runs to lead the Dominican Republic to a 7-3 win over Portland, Oregon, in a LLWS consolation game.

Both teams were eliminated from the Series on Saturday, but the Dominican Republic ended its All-Star season by winning a game in which it never trailed.

Rodriguez led off the first inning with a home run and hit another in the fifth inning to make it 7-3. He went 4-for-4 with three RBIs and three runs. Jose Marte earned the win by striking out six batters in 3 innings.

Oregon tied the game in the second inning on an RBI double by Samuel Stuhr, but the Dominican Republic scored four runs in the bottom of the inning.

Nolan Miga and Kyle Oslund each had two hits for Portland.

The Oregon players might be done playing, but they're not leaving yet.

"These kids earned their way here. None of the teams here won the lottery to get here, so we want the kids to experience all of the World Series," Portland manager Matt Farr said about his team staying through the world title game. "It was really important to us that they stay and root on the other teams and friends they've made and see them battle for the championship."