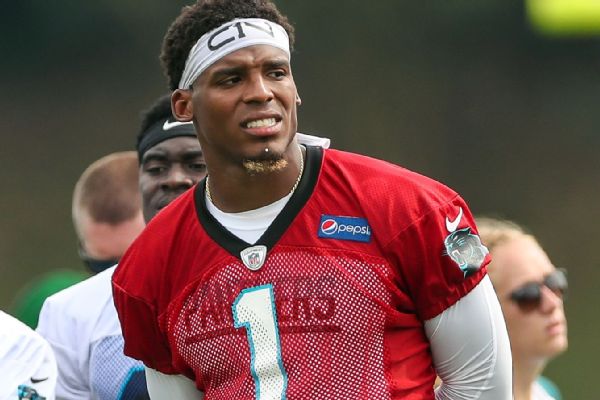 SPARTANBURG, S.C. -- Carolina Panthers quarterback Cam Newton took a positive step in his rehab from shoulder surgery on Sunday, participating in a portion of team drills for the first time in 14 days.

Coach Ron Rivera hopes the 2015 NFL MVP will be available to participate in team drills in joint practices with the Tennessee Titans on Wednesday and Thursday in Nashville.

He said there is no panic inside the organization about Newton being ready for the Sept. 10 opener at San Francisco and reiterated he wouldn't mind if Newton didn't play in any preseason games.

"There's no reason to [panic],'' Rivera said. "We're just listening to what the doctors are trying to say. They're optimistic. As long as we don't have a setback, which we don't anticipate, we certainly feel good about where we are right now. It's very positive.''

Newton hadn't thrown in team drills before Sunday since being pulled midway through a July 30 practice after experiencing soreness in his right shoulder and showing signs of fatigue.

He did not participate in team drills that required him to throw deep passes.

"Like I told you guys, it's just a matter of time,'' Rivera said. "We're going to do what the trainers and doctors say we can do with him with all intent and purpose for him to get ready for the season.''

Newton had surgery to repair a partially torn rotator cuff in the shoulder on March 30. He threw with the team for the first time on the first day of training camp on July 26. While on a "pitch count," he appeared to be throwing without any pain until the fifth practice. Since then, he has worked with team trainer Ryan Vermillion, gradually working his way back to where he was as the Wofford College portion of camp broke on Sunday.

Rivera said how much Newton participates in the joint practices in Nashville depends on how he responds on Tuesday after having Monday off.