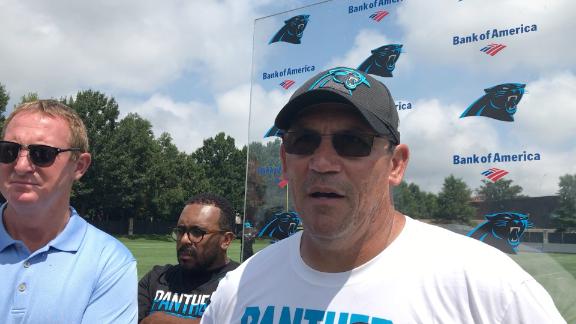 "He won't do anything live against anybody, but we're going to try and increase his individual work and try to work him up that way,'' coach Ron Rivera said Tuesday before the team departed for Nashville, Tennessee.

Newton is rehabbing from March 30 surgery to repair a partially torn rotator cuff in his throwing shoulder. He went 14 days without throwing in team drills before doing red zone work during Sunday's final training camp practice at Wofford College in Spartanburg, South Carolina.

After taking Monday off, Newton increased his work in team drills on Tuesday but was inconsistent with his timing. His first pass was at the feet of Pro Bowl tight end Greg Olsen.

Later in practice, Newton was wide and short on a sideline throw to wide receiver Devin Funchess. He did make a nice completion over the middle to slot receiver Russell Shepard.

"It's all a part of it,'' Rivera said. "It's about getting his rhythm and timing back with the whole group. I believe the other day he looked very good where you could see it. Today he was off here, he was off there.

Rivera has said since the start of training camp that the goal is to get Newton ready for the Sept. 10 opener at San Francisco. He said last week he would be OK if Newton didn't play in any of the four preseason games.

The Panthers face the Titans in their second preseason game on Saturday afternoon in Nashville. There has been no indication that Newton will play.

"Cam will do what doctors and trainers permit,'' Rivera said, regarding how much Newton will do in the next two days. "He did a couple of things individual-wise [today], and hopefully we can increase that tomorrow and Thursday.''