WTVD-AP
By Charlie Mickens
The Carolina Hurricanes are bringing the Lambeau Leap to their hockey rink. Their post-victory parties have gone viral : After each win on home ice, they've skated en masse down the ice and jumped into the glass.

Consider it the latest sign that this isn't the same team that has missed the playoffs an NHL-worst nine consecutive years.

"Instead of the standard, everybody goes to center ice and holds their stick up, we're trying something new," veteran winger Jordan Martinook said. "I think we had fun with it, and I think the fans liked it, so just keep an eye out on those. We might change it up, stick with that one, who knows?"

They call it the "Storm Surge," and they've already done it twice to rave reviews from the fans who stuck around after the final horn. 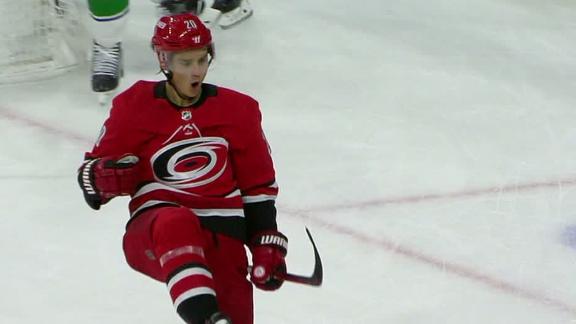 Aho's 2-point night leads Hurricanes past Canucks 5-3
Sebastian Aho had a goal and an assist, and the Carolina Hurricanes beat the Vancouver Canucks 5-3 on Tuesday night for their third straight win.

It debuted following Carolina's 8-5 victory over the New York Rangers on Sunday night. After the buzzer sounded, the team lined up along one blue line and clapped their hands over their heads while DJ Khaled's "All I Do is Win" played over the arena's sound system.

Then they skated the length of the ice, with each player taking a playful leap into the boards as the fans cheered. Video of the celebration caught fire on social media seemingly as quickly as the players bounced off the Plexiglas.

The encore came Tuesday night after beating Vancouver 5-3, but this time, as his teammates lined up, Micheal Ferland skated to center ice and led the claps before everyone skated down the ice and jumped into the glass.

"We looked at it, and they're fine-tuning it," first-year coach Rod Brind'Amour said, adding that Ferland "had a little issue with the beat. But again, that's something that they've created, and hopefully, they enjoy it and the fans enjoy it."

After Tuesday night's win, ABC11 was in the locker room as owner Tom Dundon presented star rookie Andrei Svechnikov with a framed photo of his first career goal as cheering teammates looked on.

The Hurricanes are only a week in, but they entered Wednesday night's games with an Eastern Conference-best seven points.

Their 3-0-1 record is the franchise's best since it relocated from Hartford to North Carolina in 1997, and the last time they opened a season by earning points in four straight games was in 1994 - when they started 4-0-1 and were still known as the Whalers.

During their current three-game winning streak, they've outscored their opponents by a combined 16-9.

For a team with a young core - key players Sebastian Aho, Martin Necas and Svechnikov were all born after the Whalers skated for the final time in Hartford - they're determined to keep the focus on having fun and not on the pressure of trying to snap the NHL's longest postseason drought.

"It's fun, right?" said rookie forward Warren Foegele. "High-scoring games, a bunch of young guys in here keeping it young, too. The group's been good, and that's what you want to see."
Report a correction or typo
Related topics:
sportsraleighhockeycarolina hurricanes
Copyright © 2020 ABC11-WTVD-TV/DT. All Rights Reserved - The Associated Press contributed to this report.
More Videos
From CNN Newsource affiliates
TOP STORIES