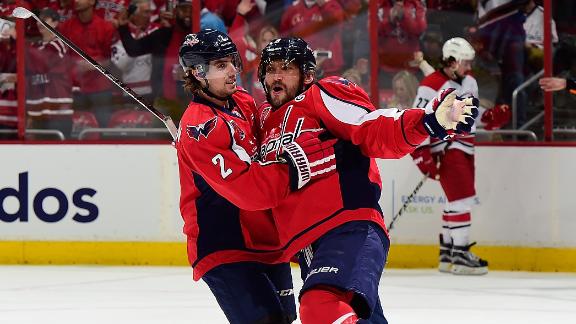 WASHINGTON -- Alex Ovechkin smiled that gap-toothed grin of his while standing for a commemorative photo in the locker room, holding the puck he put in the net a couple of hours earlier for his NHL-leading 50th goal.


"A good picture," the player known as Alex the Great proclaimed.


It's a pose he is getting used to.


Ovechkin netted No. 50 in a season for the sixth time, tying a team record in the process with his 472nd career goal, and added an assist Tuesday night to help the Washington Capitals push toward a playoff berth by beating the Carolina Hurricanes 4-2.


Only five other players reached the half-century mark at least six times: Wayne Gretzky and Mike Bossy had nine, and Mario Lemieux, Marcel Dionne and Guy Lafleur had six.


"Every year is harder and harder, but it's a huge (accomplishment) being with the names up there," Ovechkin said. "It's always nice. Every year, you don't know what to expect from yourself and how you're going to play."


The three-time league MVP gave Washington a 2-0 lead at 11:12 of the first period, taking a pass from another Russian, Evgeny Kuznetsov, and sending a shot from just inside the left circle past goalie Cam Ward.


Ovechkin dropped his left knee to the ice and pumped his right glove, then thrust both arms overhead. Many fans responded with chants of "M-V-P! M-V-P!" and then rose to give him a standing ovation when the goal was announced. Sitting on the bench, Ovechkin acknowledged the support with a wave.


"It's a lot of fun to have him as a teammate," said Brooks Laich, who scored the tiebreaking goal after Carolina had made it 2-all.


Ovechkin's career goal total matches former player Peter Bondra's with the Capitals. Ovechkin is playing in his 10th season for Washington, and Tuesday's game was his 755th, more than 200 fewer than Bondra's 961 with the franchise.


Ovechkin scored his 48th and 49th goals in Washington's previous game, a 5-2 victory at the New York Rangers on Sunday.


"Put it in his wheelhouse," said Capitals goalie Braden Holtby, who made 23 saves, "and there's a good chance it's going in."


On Tuesday, after Eric Staal and Nathan Gerbe scored for Carolina, Washington went back in front on goals 82 seconds apart in the second period by Laich and Joel Ward. The last goal came on Ovechkin's 419th career assist, moving him past Michal Pivonka for the second-most by a Capitals player, behind only current teammate Nicklas Backstrom's 422.


"We gave up four goals on the rush, and that's something we haven't done in a long time," said Carolina coach Bill Peters, whose team is last in the Metropolitan Division.


Said Staal: "Overall, I don't think we had enough guys that were willing to put the work in to get the job done."


Washington began the day seventh in the Eastern Conference, closing in on a playoff berth, and now enters a difficult stretch to end the regular season. A road trip begins Thursday at Montreal, followed by visits to Ottawa and Detroit. The Capitals then finish by hosting Boston and the Rangers.


"We knew we had a hectic schedule coming up here with teams that are making a push," said Capitals defenseman Mike Green, credited with the opening goal on the game's first shot, when he sent the puck toward the crease and it deflected off the skate of Carolina's Justin Faulk. "We didn't want to take these guys lightly."

After the game, Ovechkin chatted outside the locker room with Hurricanes F Alexander Semin, a former Capitals teammate. ... Ovechkin already owned franchise career records for points, power-play goals, game-winning goals and shots. ... Staal's goal was his 22nd; this is his ninth season with at least 20. ... Hurricanes F Riley Nash missed his second game in a row with an upper-body injury. ... Carolina plays at Florida on Thursday.

Ovechkin scores 50th goal in win
Alex Ovechkin tallied the sixth 50-goal season of his career as the Capitals defeated the Hurricanes 4-2.