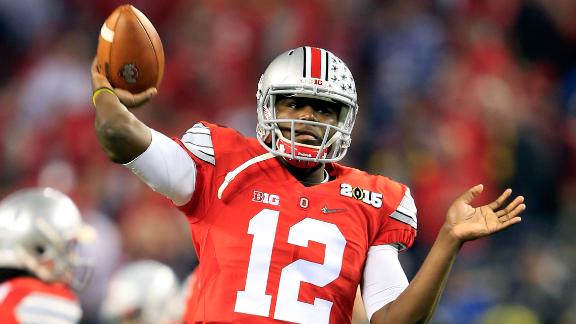 DALLAS -- One day after leading Ohio State to a national title, quarterback Cardale Jones said he hasn't made a decision about the NFL but added that he's "not ready for that level yet."

Jones threw for 242 yards and a touchdown and ran for another score against the Ducks.

"I mean, it's very odd," Jones said at Tuesday morning's news conference for the title game winners. "You know, I'm going to be starting three games in three years, and you know, guys play their whole career to have that buildup and have that motivation to play in the NFL. In my personal opinion, I'm not ready for that level yet. I mean, like coach [Urban] Meyer said, it's a conversation me and him will have later down the road. But to me right now, it's far out."

"At some point I think I'll be ready to comment on it and have that conversation," Meyer said. "... At some point there will be some conversations, and I think you guys know by now we're pretty transparent about everything we do, and at the appropriate time we'll have those conversations."

Cleveland Cavaliers star LeBron James could be seen embracing Jones after Monday's game. He was asked at shootaround Tuesday if he had any advice for the QB about declaring for the NFL draft.

Meyer, meanwhile, was also asked Monday about his interest in the NFL, and he said, "Not right now."

"I've got a commitment to Ohio State and these players," Meyer said. "I love what I'm doing. Not right now."