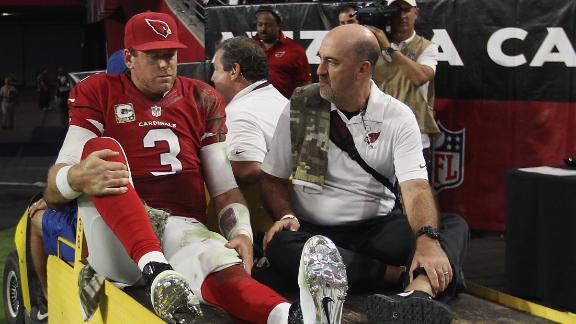 The Arizona Cardinals fear that quarterback Carson Palmer suffered a torn ACL in his left knee during Sunday's game against the St. Louis Rams, according to multiple reports.

"We don't know anything about Carson's injury or the length or whatever it is yet," Arians said following Arizona's 31-14 victory. "It is obviously a knee, but he will be evaluated and get an MRI and everything, and we'll know something more hopefully by Tuesday."

General manager Steve Keim said during his weekly Monday morning appearance on Arizona Sports 98.7 FM that Palmer will "go through a number of tests" Monday morning.

"We should have some more information at a later time today," Keim said.

Arians is scheduled to address the media again Monday afternoon.

Palmer was injured on a sack by Rams safety Mark Barron with about 11:21 left in the fourth quarter Sunday, just two days after he signed a three-year contract extension worth a reported $50 million, including $20.5 million guaranteed.

Barron hit Palmer but didn't bring him down. However, Palmer went to the turf a moment later and lay on the field while he was attended to by team trainers and doctor. While he was walking off the field, he appeared to stumble and had to be held up. He was then carted off the field.

Palmer was 25-for-36 passing for 241 yards and an interception before the injury. He missed three games earlier this season with a damaged nerve in his throwing shoulder. The Cardinals won two of those three games with Drew Stanton starting at quarterback.

"We knew Drew would come in and do a heck of a job," Arians said.

Palmer tore the ACL and MCL in the same knee during the playoffs in 2006. His surgeon at that time deemed the damage a "four" on a "scale of one to three."

ESPN.com Cardinals reporter Josh Weinfuss and The Associated Press contributed to this report.

Cardinals Fear Carson Palmer Has Torn ACL
Adam Schefter discusses the report that the Cardinals fear QB Carson Palmer suffered a torn ACL in his left knee during their win over the Rams on Sunday.

Palmer Carted Off As Cardinals Hold Off Rams
After Carson Palmer was carted off in the fourth quarter with a knee injury, the Cardinals used two defensive touchdowns to put away the Rams 31-14.