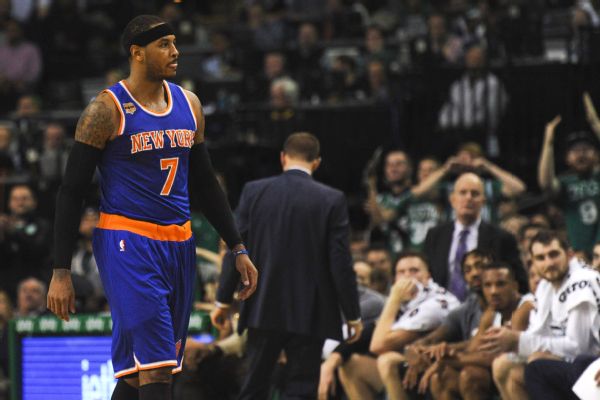 Knicks starCarmelo Anthony said Saturday that he didn't think he deserved to be thrown out of Friday's game against the Celtics and hinted that a previous history with the referee who ejected him may have played a role in his dismissal.

Anthony, speaking to reporters in Toronto before Knicks' 118-107 loss, added: "I didn't think [Friday] night it called for a tech or an ejection at that point of time. I really don't know what to say about the situation."

Anthony's wife, La La Anthony, tweeted on Friday night that Brothers "hates" Anthony and has a "personal" issue with the Knicks star.

Brothers told a pool reporter in Boston that he had no history with Anthony, a 13-year veteran. La La Anthony, however, reiterated on Twitter that Brothers has a personal issue with Anthony after Brothers' denial.

Carmelo Anthony was tossed with 4 minutes, 44 seconds left in the second quarter after consecutive technical fouls issued by Brothers.

Anthony received the first technical when he said something to Brothers after a loose ball foul call. Brothers walked away, but Anthony trailed behind and kept talking. He was then hit with the second technical.

Brothers later told a pool reporter that he whistled Anthony for the technical due to "bad language."

"One, I don't feel I said anything on getting a tech -- and two -- getting ejected,'' Anthony said.

He added: "There's nothing for me to say to him. It ain't personal with me from my end. I don't have anything to say to him. He's a ref. I play. I'll keep my mouth shut next time.''

Anthony reportedly argued with Brothers during the Knicks' road loss to Detroit earlier this season. Brothers was also officiating the Knicks-Celtics game in 2013 in which Anthony and Kevin Garnett had a run-in on the court that escalated into a confrontation after the game in the bowels of Madison Square Garden.