Casillas and Villa upbeat over chances 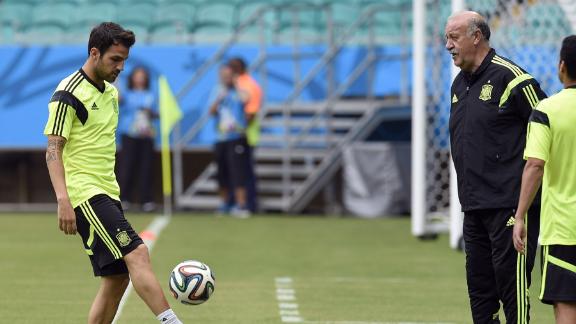 Iker Casillas and David Villa say they are confident Spain are capable of winning a fourth consecutive major tournament.

- Hunter: What can Spain expect?
- Lowe: Spain's search for goals no concern

Casillas and Villa have already won Euro 2008, the World Cup 2010 and Euro 2012, as have a large number of the Spain squad which has travelled to this summer's World Cup.

Speaking at the news conference ahead of Friday's Group B opener against Netherlands in Salvador on Friday evening, Real Madrid goalkeeper Casillas said coming into the competition as the reigning champions was far from a problem for the players.

"It is a motivation," Casillas said. "Our objective is to get a second [World Cup-winning jersey] star for our own country. For four years Spain has been the best country in the world. Any team who plays Spain is motivated to beat them. But it is in our own hands. If we keep the motivation that made us champions four years ago, the team will show itself strong and go as far as possible to defend this trophy. It will not be easy, though, of course."

Villa, who is Spain's record international goalscorer with 58 goals in 95 caps, told Radio Marca that the current squad was strong enough to reach the final again, and that retaining the World Cup would be a tremendous, and unique, achievement.

"We have all the weapons to go as far as the final," the striker said. "We have won three consecutive tournaments and nobody has ever done that, so we know the whole world is watching us. That is the difficulty, and the nice side, of this sport. If we win the World Cup it will be a huge landmark, a unique achievement. So we have more ambition than ever."

Villa, 32, said it made him proud that every team that Spain played changed their usual approach and played more defensively in a bid to counter the tiki-taka style that had brought such success over recent years.

"It makes us proud as now every team changes to play against us," he said. "But the past is no good to us now -- everything is even more difficult now, although we are ready for any game."

The Asturian striker is set to retire from international football after the tournament, and has already agreed to join new MLS franchise New York City for the start of the 2015 season. In the meantime, he is set to play on loan at Melbourne City but he indicated that his appearances for the Australian club would be very limited.

"I am not moving to Australia," Villa said. "I will set up in New York after the summer and will be with a physical trainer until the start of the season. If I go to Melbourne it is only for a short period."