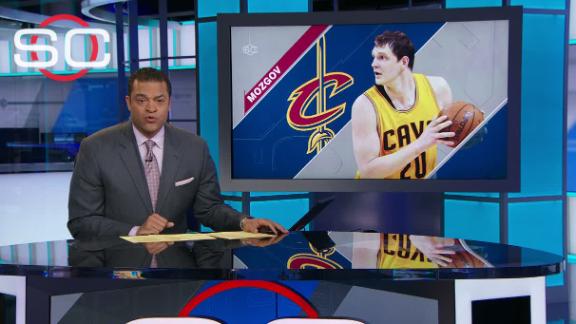 Cleveland Cavaliers center Timofey Mozgov will miss the next 10 to 14 days with a right shoulder strain, the team announced Friday.

Mozgov sat out the second half of Thursday's win over the Bucks after suffering the injury sometime in the first half. He underwent an MRI on Friday that confirmed the strain.

"I just go on the bench and sit for a minute, and there was a pain," Mozgov, who was unsure when the injury occurred, said after the game.

Mozgov entered Thursday's game averaging 8.5 points on 51.6 percent shooting and 5.0 rebounds. He left the game with 2:42 remaining in the second quarter, finishing with two points and no rebounds in 11 minutes. Tristan Thompson started the second half at center and finished with 12 points and 11 rebounds.

The team also said starting point guard Mo Williamswill miss Saturday's Eastern Conference finals rematch against the Hawks with a sore right ankle. Williams, who is running Cleveland's offense while Kyrie Irving continues to recover from surgery to repair a broken kneecap suffered in the Finals, is averaging 15.5 points.

Matthew Dellavedova started for Williams against the Bucks and had a career-high 13 assists in 38 minutes.

Information from ESPN.com's Dave McMenamin and The Associated Press was used in this report.