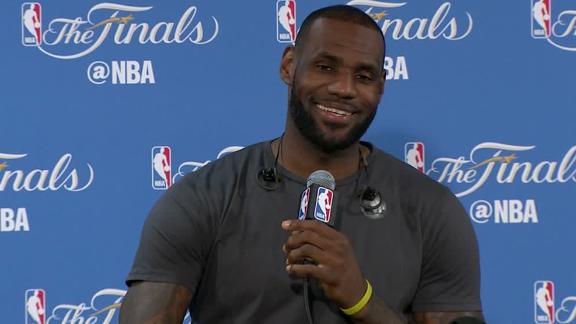 OAKLAND, Calif. -- If the Cleveland Cavaliers lose Game 7 of the NBA Finals against the Golden State Warriors on Sunday, many believe Cavs star LeBron James would still be named the series MVP.

James leads all players in the Finals in points, assists, steals and blocks, and he is tied with Cavaliers center Tristan Thompson in rebounds. No player in any playoff series of any length in league history has finished as the leader in all five of those statistical categories.

Still, the prospect of winning his third Bill Russell Award without winning a third championship is not a subject James had much interest in entertaining before practice Saturday.

James was referring to the backlash he received last month when he was asked about Stephen Curry becoming the first unanimous MVP. James opined that the word "valuable" makes defining the award's requirements open to interpretation.

It was a light moment for James. Last June, when asked the same question with Cleveland facing a 3-2 series deficit to the Warriors, his answer carried far more weight.

"I wouldn't feel good about it at all," he said. "Because at the end of the day, I'm here to win a team prize, and that's to win a championship, not an individual prize."

James' championship goal remains unfettered, despite the supposed pressure that comes with the Cavs being one win away from snapping a 52-year championship drought in the city of Cleveland.

"The word everyone likes to use in sports is 'pressure,'" James said Saturday. "I don't really get involved in it. But I guess in layman's terms, pressure [comes with this situation]. I think it's an opportunity to do something special, and I'm fortunate to be in a position where I can be a part of something that was very special."

A win would lift James' personal record to 3-4 in the Finals, a more palatable résumé than the alternative of 2-5. He was asked if his mantra of staying in the moment will help him Sunday.

"Well, I haven't always been successful being in the moment," James said. "Some things you just can't control, like I said. You can do everything you can. You can study. You can prepare. You can go out and play as great as you've played before, and you still can come out on the short end of the stick."

He went on to refer to the Cavs' 97-92, Game 7 loss to the Boston Celtics in the 2008 Eastern Conference semifinals, when he scored 45 points. Paul Pierce had an equally impressive 41 points to help Boston secure the win.

"Gave everything I had, and we lost," James said. "So that doesn't mean I wasn't in the moment. That meant I was there. I was mentally sharp. I was in tune with the game plan. Just sometimes you're not successful.

"But for an opportunity for [Sunday], I mean, anybody that's ever played the game of basketball or done anything at any level, to be able to have an opportunity to have one game for it all? I mean, you take it.

"It's an opportunity, and it's going to be fun."

LeBron laughs off Finals MVP talk
LeBron James won't budge when asked if he thinks the Finals MVP should be won only by a player on the winning team.