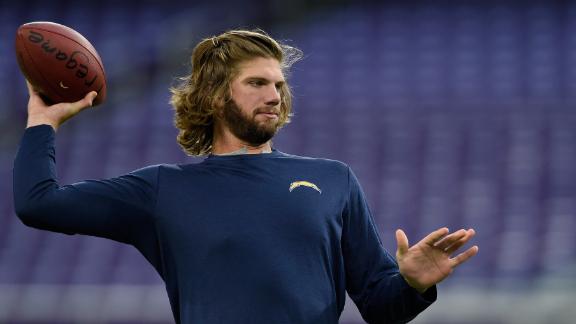 SAN DIEGO -- The San Diego Chargers will release quarterback Zach Mettenberger as part of the team's efforts to get down to 75 players by Tuesday's 4 p.m. ET deadline, a source told ESPN Insider Adam Caplan.

The LSU product had been outplayed by undrafted rookie Mike Bercovici during training camp, and did not see action in the last two preseason games for the Chargers.

The Chargers claimed Mettenberger off waivers after the Tennessee Titans released him in May. A sixth-round selection in the 2014 draft, Mettenberger finished 0-10 as a starter in Tennessee.

Mettenberger had a relationship with Chargers offensive coordinator Ken Whisenhunt from his time serving as the Titans head coach. Whisenhunt had a hand in selecting the LSU product.

Mettenberger, 25, was brought in to compete for the No. 2 quarterback job with Kellen Clemens, but that competition never really materialized.

At 6-5 and 225 pounds, the Chargers were enamored with Mettenberger's physical tools, but it did not translate to production on the football field.

In his only preseason action, Mettenberger completed 2 of 8 passes for 22 yards, with no touchdowns an interception against Tennessee. He also was sacked twice.