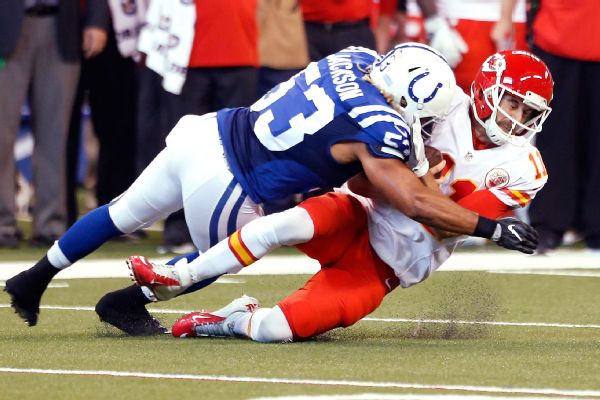 INDIANAPOLIS -- The Kansas City Chiefs lost quarterback Alex Smith and running back Spencer Ware to concussions in Sunday's 30-14 victory over the Colts.

Smith left the game in the first quarter to be checked for a possible concussion.

He returned later in the half after being cleared.

But Smith went out for good in the third quarter when, at the end of a scramble, his head was pushed into the turf by defensive back Clayton Geathers.

He was replaced both times by Nick Foles, who was 16-of-22 for 223 yards and two touchdowns.

Coach Andy Reid said Smith passed the NFL's mandated test for concussions the first time he left the game "without any problem at all.''

"We're trying to follow all the rules,'' Reid said. "We're not trying to sneak him in. Nick actually came in and was doing a pretty good job. If we had any inclination (that Smith was concussed the first time), if I did, I would have made sure we kept him out. Obviously, hindsight is 20-20. He's doing well now.

"If we had any concern we wouldn't have put him back in. There's no way he goes back into the game. For him to get in there, it's got to be a clean slate.''

Ware played the first half but didn't return to the game after that. The Chiefs, who were also without injured running back Jamaal Charles, went with Charcandrick West. West rushed for 52 yards on 14 carries.