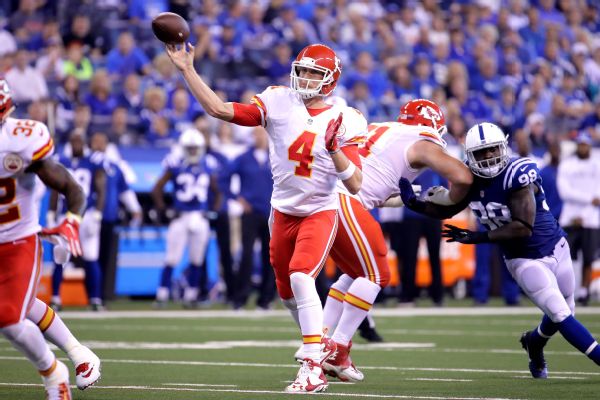 KANSAS CITY, Mo. -- The Chiefs will start Nick Foles at quarterback against the Jacksonville Jaguars on Sunday, even though they say that usual starterAlex Smithhas no concussion.

"Nope," Smith said when asked whether he felt like he has a concussion.

Smith has had two concussions in his football career, one in college with Utah and one while playing for theSan Francisco 49ers.

Coach Andy Reid said Smith is still in what he called the "return to play" phase of the concussion protocol, even though tests have found that Smith doesn't have a concussion.

"It's just in the best interests of all that we allow him to go through this," Reid said. "He's got lumps on the back of his ears, a cut ear and all these things. Just let that heal up and [let] everything settle down."

Smith will practice this week but just on the scout team. He won't be active Sunday, and Tyler Bray will be the No. 2 quarterback behind Foles.

"Everything is positive," Reid said of Smith. "I just think it's important to just step back here an inch, just take a peek and see how he does this week."

Smith lost his starting job to Colin Kaepernick in 2012 when he had his concussion with the 49ers. He was traded to the Chiefs in 2013.

Smith said he and Reid collaborated on the decision not to play against the Jaguars.

"Ultimately that's coach's decision," Smith said. "But certainly he and I have the relationship where I was open and honest with him about everything: how I'm feeling, what I'm thinking. This was a decision we came to together, certainly.

"I love playing football. I love my teammates. I love everything about it. The last thing I want to do [and] I think anybody wanted to see was to come back too soon and to see something happen again. Would that have happened? Maybe, maybe not. You just don't know. This is everybody taking the side of caution and trying to make the best decision. It's not black and white."

Smith was replaced by Foles twice during Sunday's game against theIndianapolis Coltsafter being hit on the head and being wobbly after getting up. But after examining him each time, the Chiefs determined he didn't have a concussion.

Foles was 16-of-22 for 223 yards and two touchdowns in the Chiefs' 30-14 victory. It was his first game action in the regular season since signing with the Chiefs in August.

In addition to Charles, the Chiefs are also likely to be without backup running backSpencer Warefor Sunday's game, as he has not yet passed the league's concussion protocol.