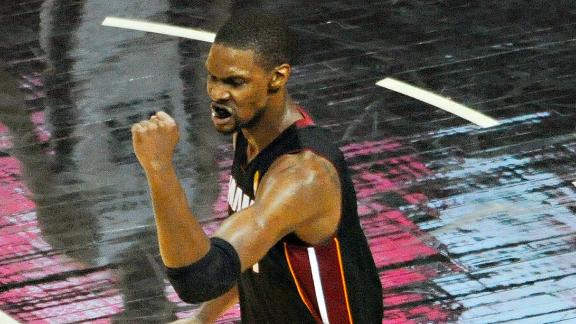 Miami Heat forward Chris Bosh said he has "no bitter feelings" toward LeBron James following James' decision to return to the Cleveland Cavaliers.

"We're going to be brothers regardless," Bosh told ESPN.com in a phone interview on Saturday. "No bitter feelings, man. It's all love."

On Friday afternoon, Bosh was standing on a basketball court in Ghana 5,000 miles away from Miami when his cell phone buzzed with a text message from James.

After four years together, James informed Bosh and Dwyane Wade separately that the four-time MVP would leave the Heat to return home to the Cavaliers.

James' decision came as a surprise, but Bosh didn't have much time to react while he was working a basketball camp with NBA Africa. Even though the run with James in Miami is over, Bosh won't be holding a grudge against James.

For Bosh, Plan A all along was to return to Miami with James, Wade and Bosh and try to reach the NBA Finals together for a fifth straight time, but with James heading elsewhere, it was on to Plan B. And that didn't take long to take shape.

Moments after receiving James' text, the Heat offered Bosh a maximum contract worth $118 million over five years, something that wasn't on the table at the start of free agency. The Heat had competition. After considering "strong" offers from multiple teams, including the Houston Rockets, Denver Nuggets, Phoenix Suns and Los Angeles Lakers, Bosh ultimately decided to return to the Heat later that night.

"[There were] very enticing offers," Bosh said. "There was some surprising advances made in everything, but I ultimately decided to stay in Miami. I think it was the right choice. I benefit from it, the team will benefit from it, from here. My heart was in Miami. I wanted to be there and keep my family there and build relationships and really keep building on something special."

This was a family decision for James, and it was no different for Bosh, who lives in Miami Beach with his wife and two young children. Bosh strongly considered leaving to take Houston's four-year, $88 million offer to join a championship contender, but, contrary to reports, Bosh insists it was never a Houston-or-Miami proposition.

"We're all making decisions to make ourselves happy and our families happy," Bosh said of his and James' decision. "That doesn't take away what we've done together and the special bond that we created and the special bond that we have and just all the memories that we had together. That will never change. As you move forward, you appreciate those moments and keep going forward."

Going forward, the Heat will build around Bosh, along with new signees Luol Deng, Danny Granger and Josh McRoberts, the latter two Heat president Pat Riley signed before James announced his decision. Deng agreed to terms on a two-year, $20 million contract Sunday that will give him a player option in the second year.

Wade has yet to re-sign with Miami, but all indications point to his return to the team after he opted out of his contract and turned away from two years and $42 million that were left on his deal.

Bosh and Wade have had discussions about leading the team back to title contention without James. Bosh believes the Heat will remain title contenders as long as they keep adding pieces to the supporting cast.

"I think right now we have the correct infrastructure to compete for a championship," Bosh said. "We have to get much better at certain positions, and there's a bunch of things that have to continue to happen. But you know a team like the Spurs, they had a lot of guys that people underestimate, but as a team, they were outstanding.

It all starts with Bosh and Wade being leaders to a younger team that features Norris Cole, first-round draft pick Shabazz Napier and possibly 2013 draft pick James Ennis, who has been impressive as a wing player in this year's summer league. Starting point guard Mario Chalmers will also return, after reportedly agreeing to a two-year deal.

Wade and Bosh have to retake the leadership position with James out the picture.

"I think over these few years, Dwyane and I have developed a bond as well," Bosh said. "I think that's going to really help us going forward."

Next season figures to be much different for Bosh. Bosh is set to be the focal point of the Heat's offense, a role he hasn't been assigned since he left Toronto. Last season he averaged just 12.1 field goal attempts per game, and his usage rate (percentage of team possessions used either by field goal, free throw or turnover) was its lowest in about a decade (22.6 percent).

In late June, Bosh met with James and Wade for lunch in Miami Beach, but no specific plans were discussed. That meeting was when Bosh first seriously considered that James might part ways. Without talking about a plan to reconvene, Bosh understood the three stars would not be making their free-agency plans in concert.

But, even still, Bosh downplayed the significance of the meeting as a turning point.

"That's what I want people to understand: That wasn't like a top-secret meeting," Bosh said. "We're friends. It was just friends having lunch. It wasn't what everybody thought it was. It was more so all of us being able to come together and have a nice lunch without having to talk about the madness that was about to happen."

According to Bosh, James stayed mum about his future over that lunch. There was no grand plan or discussion about how many years they might want to sign for. It was clear, coming out of that meeting, that they would decide their future separately. Ultimately, James took a two-year deal with Cleveland while Bosh re-upped for five.

Even though no terms were discussed over lunch, Bosh could feel something was up. The Big Three era might be over in Miami.

"It was more collectively, the body language," Bosh said. "It was more so what wasn't said. Nobody wanted to tire themselves out by trying to formulate a plan. Instead, we [were] going through making this decision separately. That was how it was supposed to be. We made our decision to come together separately, and [James] made his decision separately as well. We always have to do what's best for yourself."

"It was tough," Bosh said. "Houston was a real strong candidate. With me coming in there right away, we could be a championship contending team. [Rockets coach] Kevin McHale seems to be an excellent coach, and he gets along with his players."

Bosh ended up choosing family and familiarity. He'll have a much greater role offensively, a challenge he believes he's ready for after playing mostly outside of the spotlight the past four seasons.

Did Bosh miss being the alpha dog?

"I think sometimes you miss it," Bosh said. "You wonder if you can still do it and step up to the challenge. I haven't had to be that guy. I played with the best player in the world. I didn't have to be the alpha. But now, I get to see if I have it in me, and not many people are going to believe I have what's necessary. But that's what makes it exciting.

"You know, I'm not the same player that I was when I was 25, the last time I got to [be the No. 1 option]. I'm more mature, my game is more mature and I can do a bunch of things on and off the court to fully maximize this team's potential."

Bosh isn't lacking for confidence these days after receiving a max deal from the Heat. He insists he'll be playing with a chip on his shoulder, to disprove the doubters who say he can't lead a winning team as a No. 1 option.

When asked about who'd win a possible Cavs-Heat matchup on opening night, Bosh left no doubt where his head is at.

"Of course, we're going to win it," Bosh said. "And let me tell you something, nothing's going to change. If anything, I'm going to have a bigger chip on my shoulder. Maybe people in Miami really don't know that side of me, but I want something more than just to compete. I believe in our ability, no matter who I'm playing with. You ask me 10 times, 10 times I'll say yes."

It's a monster deal for Bosh. His max deal for $118 million will almost eclipse his total NBA earnings to date of $123 million.

Bosh says his belief in the Heat organization begins at the very top, and he's ready for the road ahead.

Bosh plans to stay in Ghana for a few days before returning home to Miami at the end of the month. One thing he wants to clear up: Toronto Bosh is long gone, and that's not a necessarily a bad thing.

"CB4 is never coming back," Bosh said, referring to his nickname as a Raptor. "A few years later, I think I'm a much better player. It's funny, even all the way over here in Africa, people are telling me, 'We need CB4 back.' I can't be that. That's impossible."

"But I feel I'm a much better leader and a much better player, and I'm much more prepared for the role, the all-around role, that they need me to fill. That's exciting for me to really challenge myself and step up to the plate next year and make sure we get it done, no matter what happens."