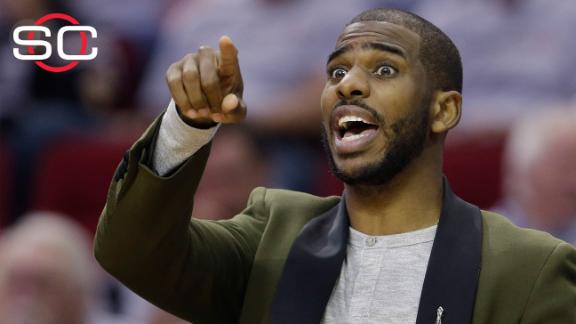 HOUSTON -- Los Angeles Clippers guard Chris Paul is doubtful to play in Game 2 of the Western Conference semifinals against the Rockets on Wednesday because of a strained left hamstring.

"I pretty much doubt it, to be honest, just from talking to him," Clippers coach Doc Rivers said when asked about Paul playing. "We'll see. Right now, I just don't think so... I doubt if he plays."

Paul, who turned 30 on Wednesday, was supposed to shoot around with the team Wednesday morning but didn't have his socks on as he gingerly walked around the court, talking to teammates and coaches.

"It's really tough, especially with the way that I play, there's only one way I know how to play," Paul said. "It's one of those things where you don't want to make it worse than it already is."

The Clippers were able to win Game 1 of the series Monday without Paul as Blake Griffin notched his second straight triple-double and third of the postseason. Rivers said that win would have no bearing on Paul's status for Game 2 but Paul smiled when asked if it did.

"That definitely didn't hurt," Paul said. "I told the guys after the last game, if it's not broke don't fix it. Blake let me know that he needed me but we'll see how it feels."

Paul has not been able to run since suffering the injury in Saturday's series-clinching win over the San Antonio Spurs in Game 7. He has been getting around-the-clock treatment since then.

"I've been with the training staff all day, every day," Paul said. "I'm doing everything possible to try and get back out on the court ... Every day is better. We'll see. If I can play, I'll play."

Paul sat on the Clippers bench Monday, occasionally coaching his teammates, and said he was more nervous as a spectator than a player.

"I told them if I were to miss tonight I'd probably have to take some anxiety pills," Paul said. "It's a lot more nerve-wracking being on the bench than it is in the game. We're such a team and guys really showed a lot of resolve. This is probably a reason why I'll never coach, not at this level. Maybe my AAU kids but not this, this is too stressful."

Paul was in tears after hitting the game-winning shot against the Spurs last Saturday and said Wednesday the tears had as much to do with knowing that his injury would likely keep him out of the opening of the next round as it was advancing past the first round.

"That's why I was so emotional when I hit the shot," Paul said. "I was telling our trainer on the bench it was almost a bittersweet moment. I'm happy we're advancing but I sort of knew I wouldn't be able to go, at least for that first game."

Paul averaged 19.1 points, 10.2 assists and 1.9 steals per game this season. This was the first time in his 10-year NBA career he started all 82 games during the regular season.