C.J. McCollum on barb at Chandler Parsons: 'I ride for my guys' 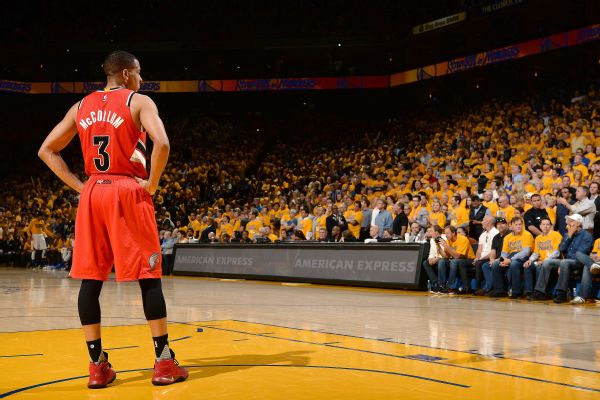 The social media feud started with a tweet from the Trail Blazers' official account, which posted a video of Parsons shooting an air ball on a 3-point attempt during the Blazers' 112-109 victory in Portland.

Parsons, evidently seeing the tweet after the game, replied with a shot of his own ... and it just took off from there, with McCollum entering the fray.

"I knocked everything over at the bar," Blazers guard Evan Turner, who said he saw the exchange while he was having his postgame meal, told reporters Saturday as he laughed at the incident. "Everyone went crazy. I went crazy. I threw my cell phone. It was unreal."

Blazers president and CEO Chris McGowan told ESPN on Saturday that the team's social media staff "meant to be lighthearted and fun but was probably a little too close to the line we try to keep on mediums like Twitter.

"It's a learning lesson for us, and we will be more mindful going forward. Our official account is meant to be fun and positive. It's not our intention to cause things to turn negative. In this case it did, and that is what we want to avoid going forward."

Parsons, however, admitted a short time later on Twitter that there was no harm as a result of Friday's exchange.

The Blazers agreed in that assessment after Saturday's practice.

"I have nothing against Chandler," McCollum said. "This is my team. I ride for my guys."

Said Turner: "It was hilarious -- I thought it was cool. I was surprised C.J. said it because he's always so politically correct, like he's trying to run for president. I gained a certain level of respect for him after that."