Clifford: Stephenson not a star yet 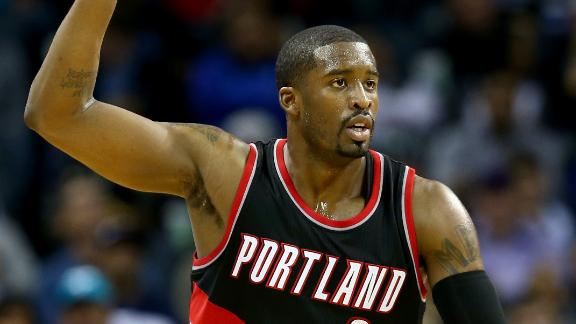 CHARLOTTE, N.C. -- Hornets coach Steve Clifford believes Lance Stephenson's problems adjusting during his first season in Charlotte are partly due to the guard's struggles to live up to external expectations.

"To be fair, one of the things that's made it more difficult for him is that he came here and people proclaimed him as the next superstar," Clifford said Wednesday. "He's not a star. He's a guy that has talent to become a star. To be a star in this league, you have to do it over years."

Clifford's comments came after Stephenson was left on the bench for the entire fourth quarter for a second consecutive game, this time during Wednesday's 105-97 loss to the Portland Trail Blazers that extended the Hornets' losing streak to seven straight games.

A combination of preseason injuries and struggles since then to find his rhythm and a consistent role in Clifford's offense has made Stephenson's transition much more difficult than some anticipated. Stephenson, one of the most versatile guards in the league, left Indiana in free agency this past summer to sign a three-year, $27 million deal with Charlotte after meeting with owner Michael Jordan.

But the transition has been far from seamless. Clifford is widely regarded as a straight shooter who doesn't mince words or shy away from offering constructive criticism.

After missing his first two shots of the second half Wednesday, Stephenson was replaced by Brian Roberts at the 8:04 mark of the third quarter and didn't return for the remainder of the game. Stephenson had eight points, seven rebounds, five assists and two steals in 23 minutes.

He was short on answers when asked afterward about his diminished role late in games.

Pressed further about his status, Stephenson said he's no longer dealing with some of the nagging injuries that slowed him in training camp and entering the season.

"I'm not hurt. I'm healthy," said Stephenson, who has seen his playing time reduced over each of the past five games. "There are no more excuses. Hey, it's Coach's decision if he doesn't want to play me in the fourth [quarter]. I'm just going to continue to work hard and do what it takes to win games."

Lately, Stephenson has hardly had an impact on games in the decisive stages. On Monday, he played just seven minutes in the second half of a blowout home loss to the Los Angeles Clippers. After that game, Clifford indicated he sat Stephenson in favor of players more willing to move the ball.

After Wednesday's game, Clifford said he stayed with Roberts for most of the second half because the reserve guard "was our best player tonight." Clifford's patience with Stephenson and the rest of the starting unit grew thin after the Hornets quickly squandered most of their 11-point halftime lead.

"We had a really good first half and just started the third quarter with nothing, obviously," Clifford said. "No intensity. No purpose. No organization. So the game changed quickly. Before we can play well, we have to stand for the right things. And I'm going to make sure we do the right things."

Clifford said he's going to rely on players he can count on and who are going to "play the right way, do the right things," to help Charlotte break out of its longest losing streak in his two seasons with the team. Clifford didn't mention Stephenson directly when addressing the overall problems in recent weeks. But asked late in Wednesday's postgame news conference specifically about Stephenson's adjustment process with the team, Clifford acknowledged it has been difficult at times.

Stephenson, who Clifford said was a nice kid who is learning but remains a work in progress, led the league in triple-doubles last season with Indiana, which had the best record in the Eastern Conference.

However, Clifford pointed out that Stephenson was a starter for only two seasons with the Pacers and averaged a career-high 13.8 points per game last season, his only one in double figures through his first four years. Clifford then compared Stephenson's career production with Jefferson's multiple seasons of averaging double figures in points and rebounds over his 11-year career.

"It's different. It's not easy," Clifford said of Stephenson. "He started two years before he got here. He played on a really good team, so everybody saw him play when no one else was playing. When Al Jefferson came here, he'd [averaged] 19 [points] and eight [rebounds] for like 10 years. You knew what you were going to get. And that's what Lance needs to become. In many ways it's not fair."

The comparisons and analogies didn't end there for Clifford, who had been a longtime assistant coach with multiple teams before he was hired by Charlotte at the start of last season.

"I've told [Stephenson] this," Clifford said. "I've been fortunate. I've been around Kobe [Bryant] and [Tracy] McGrady. They were superstars. I was also aroundAllan Houstonand Latrell Sprewell. They were two-, three-year All-Stars. [Stephenson has] got a lot of work to get to that level. Everybody proclaimed him as this guy, and if you remember the first time we got him, I said he's got to develop into that."

Stephenson's scoring average of 9.7 points is down from last season with the Pacers, and his 36.9 percent shooting from the field is the second-worst mark of his career. But his 8.1 rebounds and 5.4 assists are high marks on the Hornets.

What has been puzzling is that Stephenson has fallen out of favor late in recent games even as the Hornets have been short-handed on the perimeter because of injuries to Michael Kidd-Gilchrist and Gary Neal. Even when Walker temporarily left Wednesday's game in the fourth quarter with a sore leg, Clifford looked elsewhere for a replacement as Stephenson remained on the bench in his warm-ups.

Stephenson insists he has gotten the message and remains confident he can help the team.

"I think I'm getting there, getting more comfortable on the floor," Stephenson said. "I just need to work harder. Hopefully we can get through it and Coach can figure out what we need to do to win games."