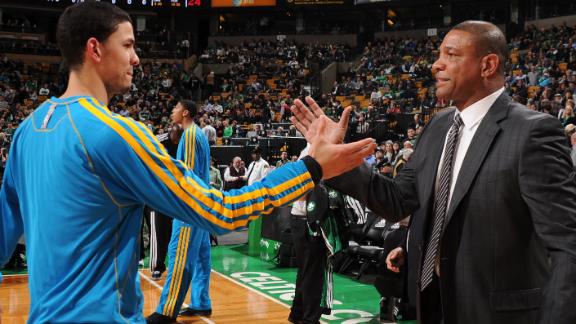 The Clippers had been looking to trade Farmar recently, but the player option in the second year of the two-year, $4.2 million contract he signed with the team in the offseason made it difficult.

The Clippers and Farmar agreed on a buyout Thursday night, which was beneficial to both parties and will save the Clippers money, according to a team source.

On Thursday, the Clippers traded for guard Austin Rivers, the son of Clippers coach Doc Rivers, in a three-team deal where they sent Reggie Bullock to the Phoenix Suns and Chris Douglas-Roberts and a 2017 second-round pick to the Boston Celtics.

Rivers was not at the Clippers' shootaround Friday morning but is expected to be available Friday night against the Cleveland Cavaliers.

The Clippers are also interested in signing guard Nate Robinson, who was waived by the Celtics this week, according to team sources. Robinson played for Doc Rivers in Boston for parts of two seasons from 2009-11.

Farmar never quite fit in with the Clippers, averaging 4.6 points, 1.9 assists and 1.2 rebounds in 36 games. He often complained of inconsistent minutes and an inconsistent role on the team.

"You don't take more than two shots, and if they go in, you had a good night, and if they don't, you struggled," Farmar said last month. "It's tough. There's no substitute for the game."