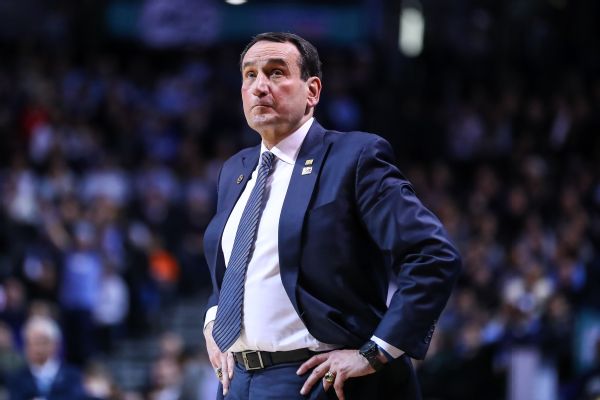 Duke coach Mike Krzyzewski will undergo knee replacement surgery this weekend, and as a result the Blue Devils have canceled their exhibition trip to the Dominican Republic.

"While it's disappointing that we aren't able to make the Dominican Republic trip, this is a positive development for both our team and myself because it will allow us to be at full strength for the start of practice this fall," Krzyzewski said in a statement.

"After three consecutive days of working with the team, it became clear that the condition of my knee wouldn't be sustainable through next season. The best course of action is to correct the problem now rather than later, when our team would be more profoundly impacted."

Duke said Krzyzewski, 70, could be released from the hospital within three days of the surgery.

Krzyzewski, the winningest coach in Division I men's basketball history with 1,071 victories, missed seven games this past season due to back surgery. Duke finished 28-9 and was knocked out of the NCAA tournament in the second round.

This will be the sixth surgery in 17 months for Krzyzewski who also had his left knee replaced in April 2016, underwent a hernia surgery a month later and had two operations on his left ankle that June.

"Unequivocally, this is the absolute right thing Mike should do, and at precisely the right time,'' Duke athletic director Kevin White said in a statement.

The Dominican Republictrip would have been an opportunity for Krzyzewski to get a look at his talented freshman class. Duke lost Jayson Tatum, Luke Kennard, Amile Jefferson, Matt Jones, Frank Jackson and Harry Giles off last year's team. The Blue Devils, who return seniorGrayson Allen, brought in five players ranked in the top 100, including a trio ranked in the top 10: big man Wendell Carter (ESPN No. 4), point guard Trevon Duval (ESPN No. 5) and wing Gary Trent Jr. (ESPN No. 7).