Colin Kaepernick insists he's changed, is excited to be with 49ers 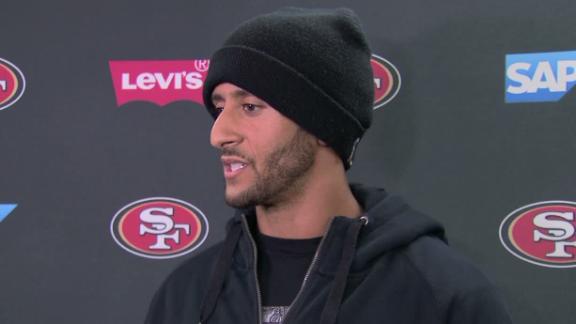 Following an offseason in which he underwent three surgeries and saw his reputation suffer both in the public and in the 49ers' locker room, the quarterback who helped guide San Francisco to two consecutive NFC Championship Game appearances says his only focus is on getting healthy and reclaiming the starting job.

It was a considerably different looking and sounding Kaepernick, who was upbeat and positive during an 18-minute meeting with reporters. His body is much lighter and less muscular, and he seemed to say all the right things while continually redirecting the conversation to football rather than the off-field issues that have followed him.

That was in stark contrast to the sullen and sometimes withdrawn attitude Kaepernick exhibited on and off the field in previous years.

This is the same player who once answered 32 questions with a total of 83 words. Only this Kaepernick is different -- or at least that's what he's saying.

At one point midway through his meeting with reporters, a member of the 49ers coaching staff stepped in to end the interview only to be rebuffed by the 28-year-old quarterback, who said he would answer any question the media had.

There were plenty, too. Most pertained to Kaepernick's happiness with the 49ers, his comfort level in Chip Kelly's offense and his request in February to be traded. At the time a deal with the Denver Broncos seemed imminent but eventually fell apart.

Kaepernick declined to go into details about the trade talks and called it a business decision.

"That was a business aspect of football," Kaepernick said. "Organizations at the end of the season go through and evaluate personnel and opportunities, and that was something I sat down with my team and did the same thing. That's how we handled the business. We were looking at different opportunities.

"I really don't want to get into specifics of what happened, why things happened. At this point everything is football, I'm a 49er and excited to work with Chip and his coaching staff. I'm excited about what's to come."

Kaepernick still has not been fully cleared by the 49ers' medical staff but he has made considerable progress after going on injured reserve in late November before having surgeries on his left shoulder, knee and right thumb.

All signs point to Kaepernick being ready for the start of training camp on July 31.

"I believe he's really stayed on top of those things," Kelly said. "He was very quick in the decision-making process. There may have been some timing issues and that was expected just because he hadn't thrown. For two days, I was really impressed with it."

Left unsaid was where a healthy Kaepernick fits in with the 49ers' big picture.

Blaine Gabbert, who took over the quarterback job after Kaepernick got hurt, has taken almost all the reps with San Francisco's first-team offense during the offseason workouts and minicamps. That has put him miles ahead of Kaepernick in terms of learning Kelly's system, though Kaepernick has tried to stay up to speed by going through the physical motions of his dropbacks and reads while standing behind the rest of the offense.

Kaepernick said he expects an open competition when the 49ers open training camp.

"They haven't said anything about pecking order or anything like that," he said. "All I've heard is Chip has told me it's going to be a competition ... and to come in and be ready to compete. That's going to be my mindset and I'm excited to do that.

Kaepernick admitted that he hasn't spoken with 49ers general manager Trent Baalke since asking to be traded and declined to talk much about it.

Kaepernick did say, however, that the events of the past 12 months have left him a changed person.

"Definitely not the same person," Kaepernick said. "What I try to do is grow. And that's not just on the football field, that's in life, that's in my relationships, that's in everything. So, to me to be able to grow and have that growth, it's something that I strive to do. And I think that's something that I took a big step in this past year."

Kaepernick touched on a few other topics as well:

Kaepernick reiterates his excitement to be with 49ers
Colin Kaepernick addresses the media on why he requested a trade from the 49ers and if he feels San Francisco is the best place for him to have success.
Related topics:
sportsespnsan francisco 49ersninersnflcolin kaepernick
Copyright © 2020 ESPN Internet Ventures. All rights reserved.
More Videos
From CNN Newsource affiliates
TOP STORIES