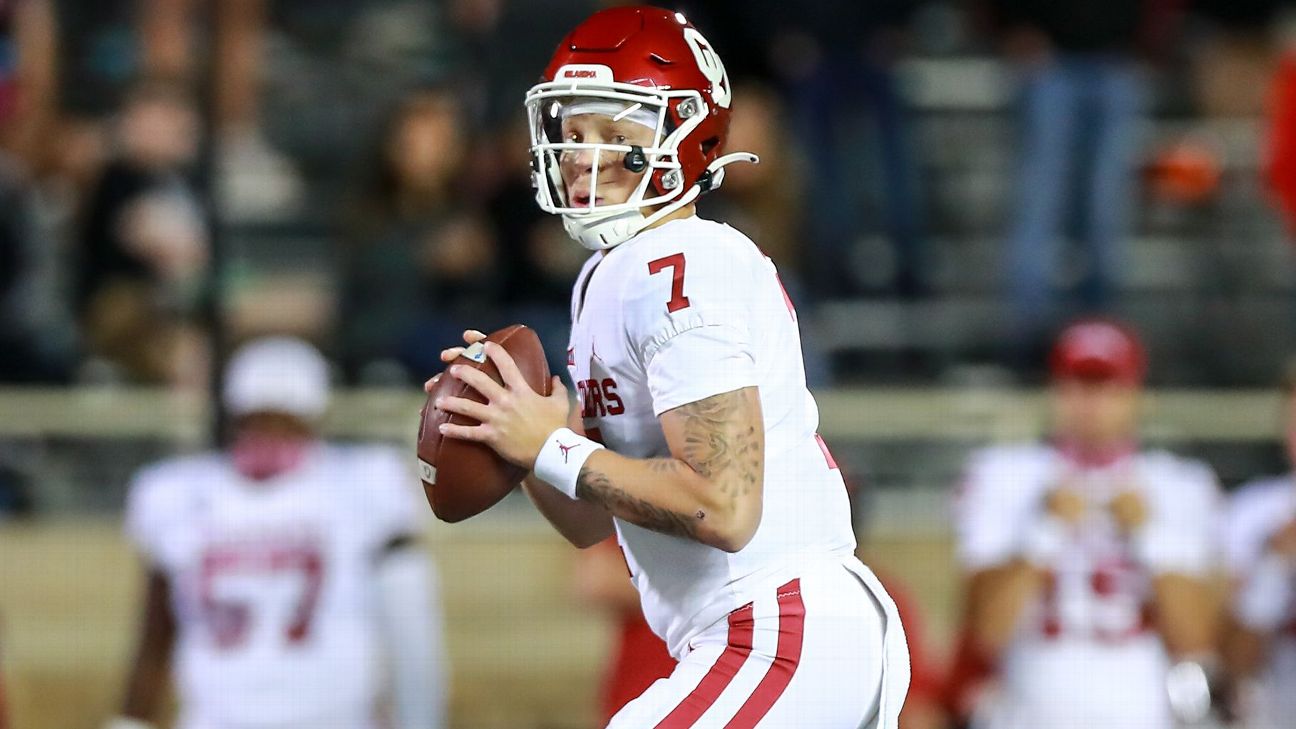 With April nearing its close, this weekend will again feature a large collection of college football spring games across the country. For many fans this will be their first chance to see their favorite football teams in person following a 2020 season full of reduced capacity at stadiums and cancellations.

Several of the sport's most prominent programs will hit the field on April 24 and here's what fans can look forward to in the best games of the weekend.

When Arizona announced Jedd Fisch as its new coach, replacing the fired Kevin Sumlin, the initial feedback was tepid. Fisch had never been a head coach and had nothing that strongly linked him to the program, which usually serve as two primary sources of enthusiasm. However, in the four months since, the staff Fisch surrounded himself with and the work he's done to land several potentially impactful transfers have generated some positive momentum. Saturday's spring game is a chance to build off that by enlisting Arizona legends Rob Gronkowski and Tedy Bruschi to serve as honorary coaches, a move that should only help Fisch overcome his outsider status. -- Kyle Bonagura

Maryland's roster will have more depth and consistency across the board than it has under Mike Locksley over the past few seasons. That is especially true on offense, where quarterback Taulia Tagovailoa is returning along with most of the offensive starters and offensive stats leaders from last season. The offense has been inconsistent the past few seasons and finished 2020 ranked No. 54 in total offensive yards per game, No. 21 in yards per play, No. 82 in rush yards per game and No. 35 in pass yards per game. The team finished 2-9 in 2019 and 2-3 this past season, but with so many returning starters on offense, the expectation is that the Terrapins will take a step forward this season. With Tagovailoa returning as the starter, the top five leading receivers in yards all returning and some young players who could make an impact, this team should be able to move forward and show progress over the past few seasons. -- Tom VanHaaren

Despite the fact that this is Mel Tucker's second season as Michigan State's head coach, this is technically his first spring practice with the team. He was hired in February, and spring practices were shut down because of the COVID-19 pandemic not long after his hire. The team went 2-5 last year and Tucker tried to add as much as he could to the roster through transfers, including Anthony Russo, who threw for over 2,500 yards for Temple in each of the 2018 and 2019 seasons with 35 total touchdowns and 26 interceptions. While most of the offense is going to look different from a personnel standpoint, the quarterback spot is going to dictate how far this offense will improve. Last season's starter, Rocky Lombardi, has transferred, so Russo will compete with Payton Thorne for the job this season. No matter who wins the job, Michigan State needs someone to step up and take the reins at that position. -- VanHaaren


The star of the show for North Carolina will certainly be Sam Howell, who figures to enter 2021 as one of the top QBs in the country with first-round NFL draft potential. But the real intrigue in the Heels' spring game surrounds the weapons Howell will have at his disposal. Gone are Dyami Brown, Dazz Newsome, Michael Carter and Javonte Williams -- and a combined 4,761 yards and 48 touchdowns between them. So, who steps up? Khafre Brown, Dyami's younger brother, looks like an obvious choice to emerge at receiver, but getting a closer look at a trio of freshmen -- JJ Jones, Gavin Blackwell and Kobe Paysour -- is a priority. Meanwhile, Tennessee transfer Ty Chandler figures to have the lead role in the backfield, and he could quickly become one of the ACC's top rushers in Phil Longo's offense. -- David Hale

Expectations are through the roof for Spencer Rattler coming into his second season -- and that includes his own expectations of himself. Lincoln Riley said this spring he thought the wide receiver position needed improvement and the Sooners are stacked with young talent there including Mario Williams, Marvin Mimsand Jadon Haselwood, along with H-back Jeremiah Hall, who has impressed this spring according to Riley. And there's no better litmus test for the Sooners' defense, which has made strides under Alex Grinch, than getting to watch how it holds up against one of the nation's best offenses. -- Wilson

It's a new era in Stillwater with the departures of wide receiver Tylan Wallace and running back Chuba Hubbard. At running back, the Cowboys have options with three returning running backs who had 100-yard games last season, including super senior LD Brown, who returns for his sixth season. Coach Mike Gundy also added Utah State transfer Jaylen Warrenin December. There's more intrigue at receiver, where Brennan Presley is coming off a Cheez-It Bowl breakout with six catches for 118 yards and three touchdowns against Miami. No returning WR caught more than 24 passes last year. -- Wilson

No one is sleeping on the potential of the Ole Miss offense with Matt Corral at quarterback and a wealth of talented pass-catchers in Dontario Drummond, Jonathan Mingo and Braylon Sanders. But pay careful attention to the defense. It needs a lot of work after giving up 38.3 points per game last season and ranking dead last in the SEC in rushing yards per game (206.9). Adding former Georgia defensive back Otis Reese helps, as does bringing in freshman Tywone Malone, the No. 5-rated defensive tackle in the 2021 class. -- Alex Scarborough

1 p.m. ET on ACC Network and the ESPN App

It is no secret the Panthers have to replace some big-time players off their top-20 defense from a year ago, starting with defensive ends Rashad Weaver and Patrick Jones. But perhaps just as important is finding a dominant run game, something that has been missing in Pittsburgh over the past two seasons. With Kenny Pickett back and a terrific receiver duo in Jordan Addison and a reemerging Taysir Mack, much of the attention this spring has focused on making improvements running the ball. Coach Pat Narduzzi has raved this spring about tight end Lucas Krull, and his key to helping get the run game established. Vincent Davis remains the starter, but watch for Israel Abanikanda, who has gained ground this spring. Narduzzi believes the offensive line will be better as well, and Maryland transfer guard Marcus Minor has made an impression so far this spring. -- Andrea Adelson

It's time to see what a Shane Beamer-led program looks like up close. The son of Hall of Famer Frank Beamer knows what South Carolina can achieve after serving as an assistant under Steve Spurrier from 2007 to 2010, and he knows what a powerhouse looks like after working for Lincoln Riley at Oklahoma, Kirby Smart at Georgia and his father at Virginia Tech. But this is Beamer's first foray as a head coach, and he's got his work cut out for him. Before he can rebuild the roster, he has to bring some energy and enthusiasm back to the program, and that starts with giving fans something to be excited about during the spring game.-- Scarborough

Saturday will mark the first of many steps in Josh Heupel's attempt to rebuild the program. He has impending NCAA sanctions to deal with from the previous staff, and he has a roster to overhaul after a mass exodus to the transfer portal that included several key players like running back Eric Gray, offensive lineman Wanya Morris, linebacker Henry To'o To'o and quarterbacks Jarrett Guarantano and J.T. Shrout. What's more, Heupel is trying to turn a pro-style offense into an up-tempo, spread scheme, and the transition could be clunky. He needs to identify a few playmakers this spring to hopefully build toward the fall.-- Scarborough

Coming off a 9-1 season and a No. 4 finish, the Aggies are stocked with talent and can go as far as their new quarterback can take them. Kellen Mond, owner of all of A&M's major passing records, won't be under center for the first time since the Aggies' freshmen were in middle school. Enter Haynes King, Zach Calzada and Eli Stowers, who will get their turns at the wheel. King was the first off the bench last year, and has the inside track at starting.-- Wilson

2 p.m. on the Longhorn Network and ESPN+

Most of the attention will focus on the battle between Casey Thompson or Hudson Card to replace four-year starter Sam Ehlinger. A talented wide receiver corps could get new life in Steve Sarkisian's offense and Bijan Robinson gets a chance to shine after a freshman year with flashes of greatness. Sure, everyone wants to see what Pete Kwiatkowski has in store for the defense, but fans are ready to see what Sarkisian has in store for a Texas offense that's been so perplexing for so long.-- Wilson