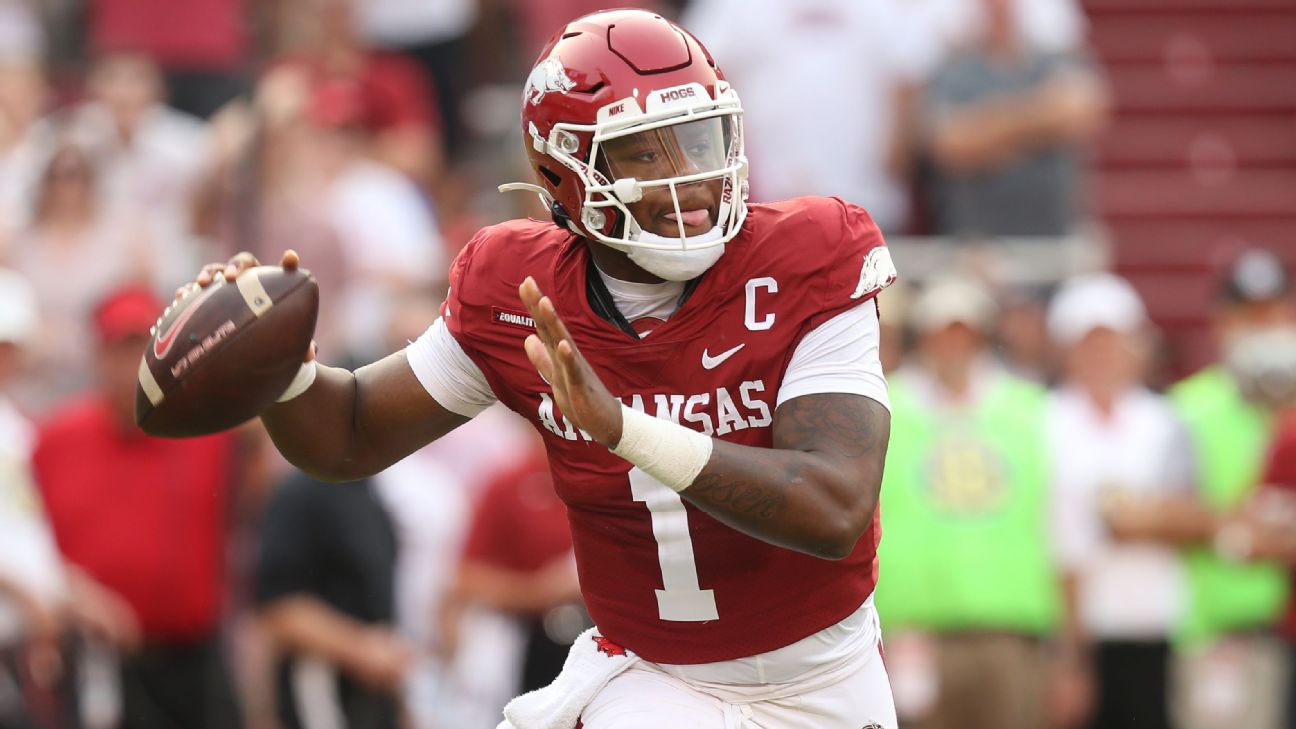 In what is shaping up to be one of the weirder seasons in recent memory, allow us to introduce you to the weirdest one-sided matchup in the past decade.

No. 7 Texas A&M and No. 16 Arkansas meet on Saturday having played each other 77 times dating back to 1903. The two former Southwest Conference rivals now play annually at AT&T Stadium in Arlington, Texas, in a contest branded as the Southwest Classic.


They took a break following the Hogs' departure for the SEC in 1991 and didn't resume play until 2009, with Arkansas winning three straight. In 2011, they met just six days after A&M announced it was leaving the Big 12 for the SEC. The Aggies blew a 35-17 second-half lead and lost 42-38.

But since 2012, when the Aggies officially rejoined the Hogs in the SEC West, it has been all A&M, with the Aggies going 9-0 against Arkansas in that span.

But that streak doesn't tell the whole story of how wild the games have been, no matter the quality of either team. Three of the games -- in 2014, 2015 and 2017 -- went into overtime. In 2014, Arkansas blew a 14-point fourth-quarter lead. In 2015, they lost an eight-point lead with three minutes left. In 2017, the Aggies won a 50-43 thriller after Christian Kirk scored his third touchdown of the game in OT and the Aggies picked off Austin Allen to end the game. In all, five of the past seven showdowns were decided by a single score, including the 2019 game featuring a historically bad Arkansas team that lost its 13th straight SEC game under coach Chad Morris.

Also of note: The Aggies knocked starting Arkansas quarterback Nick Starkel out of that game. The same Nick Starkel who entered the 2017 season as A&M's starting quarterback before getting injured in the opener against UCLA and giving way to Kellen Mond. Starkel opted to transfer, then transferred again to San Jose State,where he's now starting.

Last year, the game was played in College Station because of the pandemic, with the Aggies cruising to a 42-31 win.

Now the game returns to Arlington on Saturday (3:30 p.m. ET, CBS) and this year's twist is that both teams are ranked for just the third time in the history of their rivalry. After the Hogs flattened Texas two weeks ago, plenty of message-board bragging rights are on the line -- either Arkansas can claim a state championship in Texas, or the Aggies can prove their SEC mettle over the incoming Longhorns. Meanwhile, in the real standings, the winner becomes the biggest threat to Alabama's West chokehold.

No. 18Wisconsin at No. 12 Notre Dame (at Soldier Field in Chicago, noon ET, FOX): Here's Notre Dame's chance to prove it's better than what it has shown the first few weeks. Close wins against Florida State and Toledo are nothing to feel great about, and a two-touchdown win over Purdue isn't a glowing endorsement for a team that expects to compete among college football's best every year. For Wisconsin, they can add a non-conference ranked win to their resume. It won't necessarily make up for the loss against Penn State earlier in the season, but if that remains their only loss and they win out, they are in Playoff business.

No. 9 Clemson at NC State (3:30 p.m. ET, ESPN/ESPN App): The Tigers come into this game off a 14-8 win against a Georgia Tech team that was a massive underdog. Clemson's offense hasn't come close to living up to the hype it received before the season, and will be going against an NC State defense that's currently 23rd in Bill Connelly's SP+. The Tigers should and will be favored in this game, but they're going to have to show some sort of life on offense before people really start smashing the panic button with this team. It certainly helps that their defense hasn't allowed a single offensive touchdown this season.

Rutgers at No. 19 Michigan (3:30 p.m. ET, ABC/ESPN App): This game has an intrigue about it that we're not sure anybody expected coming into the season. Rutgers is 3-0, and Michigan, also undefeated, has been arguably the best team in the Big Ten East. The Scarlet Knights will be without two cornerbacks, Max Melton and Chris Long, who are suspended after being taken into police custody because of a paintball gun incident. Melton, who is a starter, has two interceptions, a blocked punt, a fumble recovery and eight tackles this season. That will certainly be advantageous for Michigan and Cade McNamara, who is proving to be one of Jim Harbaugh's best quarterbacks since he became the head coach in Ann Arbor.

Southern Miss at No. 1 Alabama (7:30 p.m. ET, SEC Network/ESPN App): Another benchmark for greatness is the only real intrigue in this one. Nick Saban can win his 100th straight game against an unranked opponent. That's longer than the next three longest active streaks combined (Clemson with 36, Notre Dame with 35 and Cincinnati with 24).

Akron at No. 10 Ohio State (7:30 p.m. ET, BTN): If you're really into evaluating the teams we believe to be Playoff contenders, you should actually keep tabs on this game. Ohio State's defense has been giving up yards at a clip we simply aren't used to. The Buckeyes gave up 408 yards against Minnesota, 505 against Oregon and 501 against Tulsa. They cannot keep up that kind of pace and expect to be in the Playoff in January. Ryan Day switched defensive playcallers last week against the Golden Hurricane from Kerry Coombs to Matt Barnes, and while the change didn't make much of a difference, it'll be a situation worth watching as the Buckeyes' season progresses. Ohio State hasn't lost to a team in the state since 1921, and that probably won't change on Saturday. But keep an eye on the box score here.

West Virginia at No. 4 Oklahoma (7:30 p.m. ET, ABC/ESPN App): The real intrigue here is seeing if Oklahoma's offense can return to form and prove they belong at this lofty ranking. Last week, Nebraska held the Sooners to the fewest points (23) since Lincoln Riley arrived in Norman. Spencer Rattler, the preseason favorite for the Heisman, looks to have fallen from contention. But none of that will matter if the Sooners can keep winning, no matter the margin or number of fireworks. West Virginia is 0-25 all time on the road against top-five teams.

Arizona at No. 3 Oregon (10:30 p.m. ET ESPN/ESPN App): UCLA lost to Fresno State last weekend. USC has already fired its coach. It appears the Ducks have to survive the season to be the conference's only hope for a playoff spot. This game looks like a safe bet: The Wildcats are 0-3, 28-point underdogs and coming off a loss to Northern Arizona.

A man of his word

Last week, Portland State coach Bruce Barnum offered to buy anyone's beer (and as many as they wanted) at his namesake Barny's Beer Garden at Hillsboro Stadium to encourage fans to come out and watch his Vikings. On Tuesday, the coach had the receipts: a $14,448 bar tab.

The best jerseys of the week

UTEP is playing New Mexico on Saturday, and while we normally wouldn't recommend you watch this game, we'd like to present to you the Miners' Texas Western uniforms:

The best NIL shirt yet 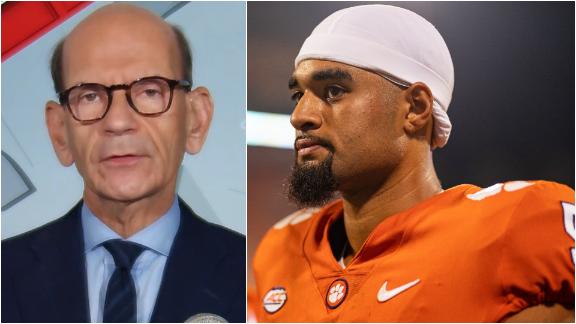