ESPN
By Dave Wilson
Welcome to Week 6 of the college football season. We're just two weeks out from the Big Ten joining the mix.

This week, there's a big test with No. 7 Miami visiting No. 1 Clemson, just the fifth ACC game featuring two top-10 teams since 2014, when the College Football Playoff era began. What Miami is up against: Clemson's 24-game home winning streak, the longest active streak in the FBS.


Tennessee has its own streak to break. The Vols have lost 33 straight games to AP top-10 teams heading into the afternoon game at No. 3 Georgia.

Texas and Oklahoma will meet at the Cotton Bowl in Dallas, which will be odd without the State Fair of Texas going on outside. They're also both coming off a loss for just the ninth time in the 116 years this game has been played. Still, the pure, vicious disdain these two have for each other will flow through the stadium.

We'll be here all day to keep you updated.

Miami was just the latest in a long line of challengers to try to stake a claim to the ACC's crown, but on Saturday, Clemson offered yet another reminder that there's only one king in this league. The Tigers' defense absolutely overwhelmed Miami QB D'Eriq King, leaving nowhere for him to throw on the outside, and largely stifling his ability to run. In the end it was just a handful of self-inflicted wounds that allowed Miami to even stay within striking distance, but there was never much of a doubt who the more talented team was. Add in a healthy dose of Travis Etienne and Trevor Lawrence again looking like superstars, and if there was any doubt that Clemson is still at the ACC mountaintop, Saturday's game offered an emphatic answer.

The high hopes for a potential signature win were dashed for the Canes pretty early on, when it was clear that Clemson was still the markedly better team. The Tigers' own flubs managed to keep things relatively close well into the second half, but really, the game was never much of a contest. For all D'Eriq King's early season success, the lack of separation created by a mediocre receiving corps was on display Saturday, leaving the Miami QB with virtually nowhere to go with the ball. The result was a woeful passing attack and a number of coverage sacks. Yes, the rest of the road gets a lot easier for the Canes, but this was a reminder that there's still a long way to go to get to the top.. -- David M. Hale

There's no doubt now that Mac Jones is a capable replacement for Tua Tagovailoa and that Alabama's offense can hang with anyone. But that defense? Sheesh. After what Ole Miss was able to do to it, racking up 48 points and 647 yards, there are more questions than answers. There's talent on that side of the ball, no doubt, but there were so many uncharacteristic missed tackles and blown assignments. If Saban and defensive coordinator Pete Golding can't get it fixed in a hurry - remember, Georgia's up next - then the Crimson Tide could be in trouble. -- Alex Scarborough

Notre Dame hadn't played since Sep. 19 and it showed early on in this game against Florida State. Running back Kyren Williams fumbled on the first offensive drive, but then shook the rust and off and built some momentum. Williams finished the game with 185 yards rushing and two touchdowns and Chris Tyree had 103 yards and one touchdown. The run game was dominant, racking up 353 total yards and four touchdowns, helping to put the Irish at 3-0 on the season. -- Tom VanHaaren

The Tigers might be 2-1 now, but they've got some serious work to do heading into a trip to South Carolina next weekend. After a solid season-opening win against Kentucky, it's been anything but smooth sailing. Last weekend, Auburn was manhandled by Georgia, and instead of getting back on track against a perennially subpar Arkansas squad, the Tigers almost went off the tracks. If not for a questionable call by the officials, Anders Carlson might not have been able to make that game-winning field goal with 27 seconds left, saving Gus Malzahn & Co. from a week of embarrassment. -- Alex Scarborough

Georgia wasn't helping itself early against Tennessee, and after the first half, it seemed the Vols would have a real shot at a victory. But in the second half, Georgia wore Tennessee down, and used defense to propel itself to a 44-21 victory at home in Athens. If you're a Georgia fan, you'd like to see more consistency out of the offense, but the Dawgs are still looking like one of the better teams in college football. -- Harry Lyles Jr.


The Volunteers came into Athens without a turnover on offense in their first two games -- they had three in the second half alone, as they let a 21-17 halftime lead slip away. Georgia miscues helped Tennessee early -- a bad snap by UGA allowed the Vols to score in the very first minute of the game -- but they weren't able to capitalize for the rest of the time. It was a disappointing loss after the way they started the game. -- Harry Lyles Jr.

Surviving and advancing is the most important thing, and BYU did that against UTSA on Saturday. Zach Wilson (22-for-30, 292 yards, two scores) and Tyler Allgeier (116 rushing yards) were good, and the defense made enough stops to remain unbeaten. But costly penalties, a red zone turnover and a physical UTSA defense kept the Cougars from pulling away. They will need all the style points they can get against their schedule, and there were none today. -- Bill Connelly

Sam Ehlinger looked like he was going to carry Texas to a comeback win against Oklahoma, which led 31-17, in the third quarter. He went 30-53 for 287 yards passing and rushed for 112 yards and four touchdowns, but his interception in the fourth overtime ended up sealing the Longhorns' loss. Aside from Ehlinger, Texas' running backs had 11 carries for 29 yards and the defense couldn't stop Oklahoma when it counted. Texas had 11 penalties for 101 yards and lost three turnovers to an OU team coming off consecutive losses. It's time to ponder what a realistic season for Texas looks like. -- Dave Wilson

Texas A&M turned in the biggest win of the Jimbo Fisher era by taking down No. 4 Florida. The most impressive aspect of the win was how proficient the offense looked: QB Kellen Mond had his best game as an Aggie, the running game -- led by Isaiah Spiller -- was strong and the offensive line was forceful and effective. The Aggies are in great shape heading into the next four weeks. -- Sam Khan Jr.

The Gators saw an 11-point second-half lead evaporate and the most glaring issue seemed to be the Florida defense. It got dominated up front by the A&M offensive line and allowed several big plays downfield. All told, the Gators yielded 543 yards. If you score 38 points on the road in the SEC, you should be in good position to win. Florida coach Dan Mullen said afterward: "We're going to have to reevaluate a lot of things defensively." -- Sam Khan Jr.

LSU didn't exactly come into the season expected to replicate last year's championship team, but with an opening three-game schedule of Mississippi State, Vanderbilt and Missouri, a 1-2 record didn't figure to be in the cards to start the year either. After a horrific defensive showing in a 45-41 loss to Missouri, though, that's where the Tigers are. Even with several high-profile departures for various reasons, losing defensive coordinator Dave Aranda, who left to become the head coach at Baylor, is the most glaring. -- Kyle Bonagura

Headed into Saturday's game, Mack Brown had to answer questions about why the Tar Heels' offense was not making as many explosive plays as many anticipated. The narrative will be vastly different after a 56-45 win over the Hokies in which they had 656 yards of total offense --Michael Carter and Javonte Williams each rushed for more than 150 yards and two touchdowns, and Sam Howell threw three touchdown passes. North Carolina raced out to a 21-0 lead, and after Virginia Tech closed to within five in the fourth quarter, the Tar Heels scored on consecutive drives to put the game out of reach. It was by far their most impressive performance of the season, and they showed they are more than worthy of their top-10 ranking. -- Andrea Adelson

For the third straight game, Virginia Tech was forced to play without key starters and backups on defense. It finally caught up with the Hokies. After a disastrous start to the game, Virginia Tech fought its way back behind Khalil Herbert and some important runs, closing the gap to 42-37 to end the third quarter. But the defense simply couldn't make the stops when needed and ended up allowing 399 yards rushing and 9.3 yards per carry. Herbert had another 100-yard rushing game, while Braxton Burmeister and Hendon Hooker both played quarterback for the Hokies, but it simply wasn't enough. -- Andrea Adelson

The Cyclones were flat-out dominant in their win over Texas Tech, racking up 516 yards and holding the Red Raiders under 100 yards through the first three quarters. At the moment, they look like the Big 12's best team. Their 3-0 start in conference play is a first since 2002 and only the second time since 1950. QB Brock Purdy and RB Breece Hall have this team rolling. -- Sam Khan Jr.

BYU's mascot continues to impress with his latest trick.

Saturday's matchup between Florida and Texas A&M was supposed to air on ESPN, but then something flew in the way.

El Arroyo, a well-known restaurant in Austin known for its colorful signs, wants Texas and Oklahoma to play nice ... jk.

Way to make it weird

Against Kansas State, TCU is wearing its alternate uniform featuring red accents, which first made an appearance alongside the Horned Frogs' purple and white or black in 2009, when Nike unveiled the "Spit Blood" Pro Combat uniforms. The red, Nike said, represents "the blood that shoots from a horned frog's eyes when under attack."

He seemed delighted with the question

You might have heard that Nick Saban and Lane Kiffin face off today. Saban agreed with Kiffin's assessment of what a one-on-one matchup on the outside might look like in 2020. 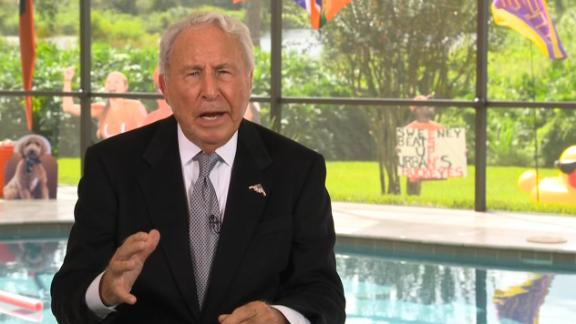 Corso's Pick: Miami vs. Clemson
Alex Rodriguez and Lee Corso make their predictions for No. 7 Miami vs. No. 1 Clemson. 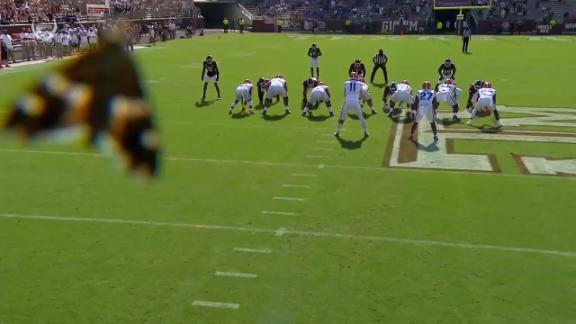 Chances are you've never seen a moth on a SkyCam like this
Florida vs. Texas A&M is briefly interrupted by a moth landing on the SkyCam's camera lens. 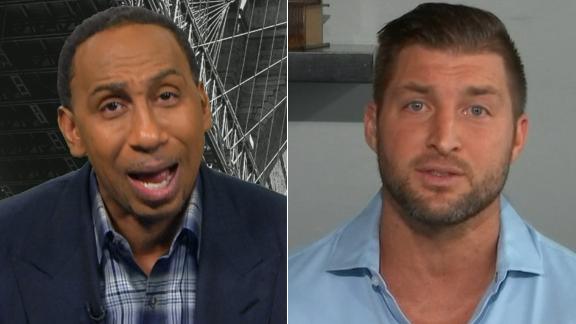 Why Tebow thinks Stephen A. should watch Clemson-Miami
Tim Tebow provides reasons Stephen A. Smith should be excited for Clemson's matchup with Miami on Saturday night. 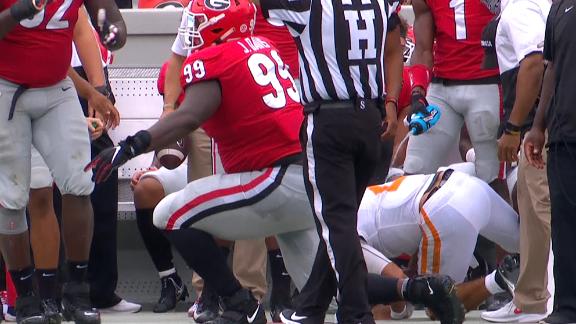