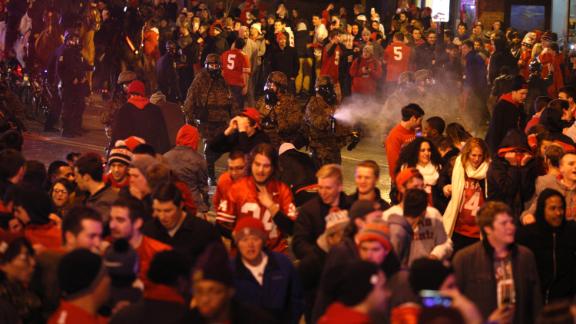 COLUMBUS, Ohio -- The gates to the Horseshoe were locked and Mirror Lake was frozen over, but that didn't slow the celebration on the Ohio State campus.

Instead, students congregated around the home stadium of the new national champions and hundreds ventured out onto the frozen lake for a new twist on an old tradition before police officers eventually cleared out both locations relatively peacefully after the No. 4 Buckeyes finished off a 42-20 win over No. 2 Oregon.

Officers reported using pepper spray, from a canister and from what appeared to be a paintball gun, but said that particularly in the case of the revelry at Mirror Lake, that was used for the safety of the students, given the combination of low temperatures, slick surfaces and large crowds.

The school said some revelers who got into Ohio Stadium tore down a goal post on the south end of the field.

University spokesman Dan Hedman said the goal post was one used for high school games and not the regular, permanent post.

The fans decked out in all kinds of Ohio State jerseys, singing "Carmen, Ohio" and chanting "O-H-I-O" had no problem with the first part of that equation, and the quick response from local officers appeared to take care of the second half.

Officers patrolled the main drag through campus on foot, on horses and in cruisers after the game early Tuesday. The Columbus Fire Department said 89 fires were reported near the campus, mostly involving trash bins, dumpsters and couches.

The agency also said it responded to five reports of people with injuries.

WCMH-TV, showing images of revelers burning a couch, reported Tuesday that police arrested a handful of students who could face both criminal and university charges.

According to The Columbus Dispatch, as of 1:30 a.m., only one person was reported to have been transported to a hospital, although sizable gatherings on N. High Street also prompted the use of pepper spray and left some with watery eyes.

Several students at Mirror Lake reported having been hit with the spray as well, but when approximately a dozen officers showed up to close down the party, it moved on without incident.

"It's a little bit different out on the ice, but it's all awesome," sophomore Corey Brewer said. "There's no feeling like it, really. To win a national championship when I'm in school, there's just no better feeling."

Response in Eugene, Oregon, was relatively subdued.On campus, one fire was reported, while five fires were reported off campus, police told the Register-Guard.

"We weren't expecting anything to happen with a game loss," UO police Lt. Herb Horner told the newspaper. "We thought a win might bring some exuberance." 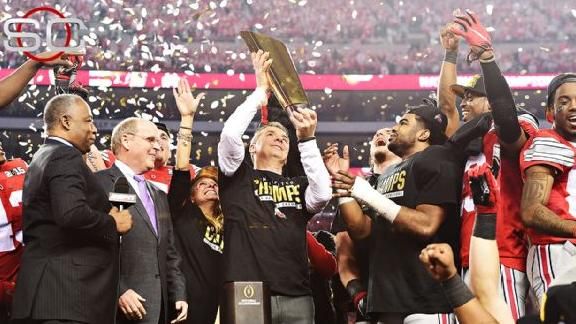