Connor McDavid goes No. 1 to Oilers; Sabres get Jack Eichel at No. 2 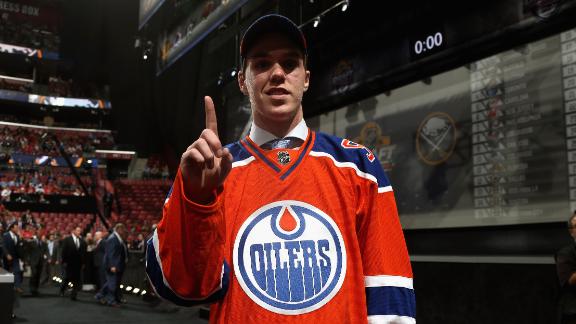 SUNRISE, Fla. -- The Connor McDavid era has officially started in the NHL.

The highly touted prospect, regarded by many as a generational talent, was selected first overall by the Edmonton Oilers in the 2015 NHL draft Friday night at BB&T Center in South Florida.

"Unbelievable," McDavid said after the pick was announced. "This is such a surreal feeling. It's really hard to put into words right now how much this means to me.

"It was absolutely a dream come true."

The selection was a surefire lock ever since the Oilers won the draft lottery in April, with the 18-year-old center the overwhelming consensus No. 1 pick.

"This one wasn't a tough one," new Oilers general manager Peter Chiarelli said. "Connor is a special talent and a special kid, too.

McDavid, a native of Newmarket, Ontario, lit up the Ontario Hockey League in his past three seasons with the Erie Otters. The prolific scorer finished with 44 goals and 120 points in 47 games this season (2.55 points per game). He was named the OHL's Most Outstanding Player and received the Wayne Gretzky "99" award for OHL Playoff MVP after finishing with 21 goals and 49 points in just 20 postseason games.

McDavid's arrival in Edmonton is met with ample anticipation as the Oilers look to rebound from yet another abysmal season in 2014-15. They finished 28th in the league with a 24-44-14 record. The team axed coach Dallas Eakins during the regular season and has since hired former San Jose Sharks coach Todd McLellan to lead the way.

"It's an exciting time to be an Oiler," McDavid said. "I know fans are excited, and they should be."

This was the fourth time since 2010 the Oilers selected first overall. According to ESPN Stats & Information, no team has had a worse points percentage than Edmonton since the 2009-10 season (.406).

With the No. 2 pick, the Buffalo Sabres selected Hobey Baker winner Jack Eichel.

The U.S.-born Eichel is a star in his own right, with many scouts believing he could have headlined a draft class as the first overall pick had he not come through at the same time as McDavid.

The 18-year-old center recently completed his first season at Boston University, where he finished with 26 goals and 71 points in 40 games.

Shortly after Eichel was selected, NHL commissioner Gary Bettman announced a blockbuster trade that gave Sabres fans even more to cheer about -- with Buffalo landing Ryan O'Reilly in a multiplayer swap with the Colorado Avalanche.

The intrigue in this draft started at No. 3, where the Arizona Coyotes grabbed forward Dylan Strome -- McDavid's teammate with the Otters, and someone who actually finished this past season with nine more points than the No. 1 pick, albeit in 21 more games.

Torontotook Mitch Marner at No. 4, making it four straight centers to lead off.

For Werenski, who doesn't turn 18 until next month, it's an odd pairing: He's a Michigan Wolverine who's going to the home of Ohio State.

A pair of right wings rounded out the top 10, Timo Meier toSan Joseand Mikko Rantanen toColorado. That meant left wing Lawson Crouse, who some thought would be a top-five pick, fell to Florida at No. 11 -- and got a huge ovation from thePanthers' crowd.

"It all turned out very well for me," Crouse said.

Dallaswent with another right wing, taking Russian prospect Denis Gurianov at No. 12. And then the next 15 minutes or so belonged to Boston.

The Bruins had the No. 14 pick starting the day -- then got the No. 13 and No. 15 selections in a pair of trades earlier Friday. They sent left wing Milan Lucic toLos Angelesfor defenseman Colin Miller, goalie Martin Jones and the 13th pick, then got No. 15, No. 45 and No. 52 from Calgaryfor defenseman Dougie Hamilton.

"The cap system in the NHL makes it tough to get good players," DeBrusk said. "I think the moves they made were good. They're making strides -- I mean, we are making strides."

The New York Islanders weren't scheduled to pick until No. 72 but swung two deals to land first-round talent. They got the 16th pick from Edmonton and took center Mathew Barzal, then made another swap with Stanley Cup finalistTampa Bayfor No. 28 and snared forward Anthony Beauvillier.

For the first time since 2012, a goalie went in the first round whenWashingtontook Russia's Ilya Samsonov at No. 22.

Chicago, which won the Stanley Cup for the third time in six seasons, didn't have a first-round pick. TheBlackhawkswon't select until the draft's final six rounds are held Saturday.

McDavid: 'Couldn't be more proud to be an Oiler'
Linda Cohn speaks with the top pick of the 2015 NHL draft, Connor McDavid, about what he was feeling when his name was called and how he'll manage expectations as he enters the league.