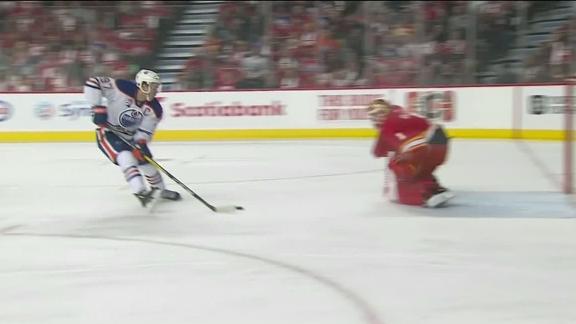 CALGARY, Alberta -- Connor McDavid came through with another big night, and the Edmonton Oilers got another big win.

McDavid had a goal and two assists for his second straight three-point game to lead the Oilers to a 5-3 win over the Calgary Flames on Friday night.

According to the Elias Sports Bureau,McDavid became the first NHL teenager and first Oilers player to open the season with consecutive three-point games.

"We will be talking about him all year and for many years to come," Edmonton coach Todd McLellan said of his 19-year-old captain. "You can have a game plan, but he has all the skills and tools, a toolbox that is second to none."

McDavid showcased his speed in the first period by getting behind the Flames' defenders for a breakaway and beating goalie Brian Elliott with a lightning-quick shot.

"He's deadly off the rush," Flames defenseman Mark Giordano said. "Again tonight, he capitalizes on his chances. He got a few breakaways. Power play, he made some nice plays. That's another big night for him."

McDavid helped set up Eberle's tying goal in the second period and Draisaitl's go-ahead score early in the third.

On Draisaitl's tiebreaking power-play goal, McDavid patiently hung onto the puck in the high slot and started a tic-tac-toe sequence with a quick pass down low to Milan Lucic, who zipped the puck across the crease to Draisaitl for a tap-in.

"I don't really know what to say. He's just phenomenal. He's just that good," Draisaitl said. "He just makes something happen every single shift out of nothing where you think there's nothing going on and he just creates absolute top, Grade-A chances. He's very special."

"We're not giving up a ton of chances, we're just giving up real high-quality chances, and there's a big difference," said the first-year coach, who took over in the offseason after Bob Hartley was fired.

About five minutes after Draisaitl's goal, Dennis Wideman's turnover led to a short-handed breakaway for Letestu, who beat Elliott to make it 4-2.

Jokipakka scored into the top corner off a feed from Kris Versteeg to get Calgary within one with 7:44 to go. However, the Flames couldn't complete the comeback as Draisaitl added an empty-netter with 1:20 left.

Elliott, who has given up 10 goals on 55 shots through two games, said he wasn't sure how many odd-man rushes he faced throughout the game.

"There were a lot," he said. "I don't know if there was a count going, but we can't give those up. We have to keep the play in front of us a little bit, especially against a team where we know they're jumping at any opportunity."

Trailing 2-1 after a first period where they were outshot 24-12, Edmonton tied the game 5:25 into the second on the man advantage when Eberle knocked in a loose puck.

Calgary started the scoring 1:22 in with Monahan putting in a second rebound after Deryk Engelland hit a goal post and Johnny Gaudreau was stopped.

McDavid tied the game on his second breakaway of the period when he tore away from Giordano and zipped a shot over Elliott's shoulder at 7:45.

Frolik restored the lead with about 8 minutes left in the first when his shot from the sideboards slipped past Talbot, who didn't appear to see it.

Calgary's 24 shots in the first period were one off the franchise record for shots in a period, done twice before (1988, 2005). ... Calgary's only lineup change came on defense, inserting Jokipakka for Nicklas Grossmann. ... Edmonton made two changes, with Eric Gryba replacing Brandon Davidson on the blue line and Anton Lander coming in for rookie Anton Slepyshev up front. ... The final two games in the season series are both in January.

Flames: At Vancouver on Saturday night.

Information from The Associated Press and ESPN Stats & Information was used in this report.