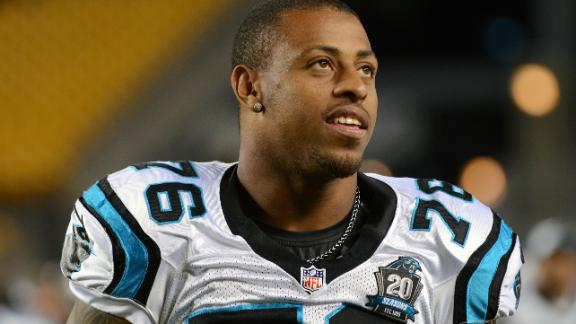 The incident occurred as the defensive linemen were running sprints and escalated to the point where teammates needed to step in.According to a Yahoo! Sports report, Coleman made a pointed reference to Hardy's domestic violence issues.

"There was no physical altercation of any nature whatsoever," Loeffler said. "No physical contact, touching, nothing. Basically my understanding is that Davon and Greg Hardy finished a workout, had a discussion and there was nothing to step in to and nobody did because there was nothing going on except a discussion ... I think it's getting a little blown out of proportion."

When asked about the incident at an Associated Press Sports Editors meeting Friday, commissioner Roger Goodell said he was not aware of the incident and would get more information before commenting.

Hardy was suspended 10 games earlier this week for violating the league's personal conduct policy. In July 2014, Hardy was found guilty of assaulting a former girlfriend, Nicole Holder, and threatening to kill her, and he received a 60-day suspended sentence and 18 months' probation on misdemeanor charges. He appealed the judge's ruling in favor of a jury trial, and the case was dismissed in February when Holder chose not to cooperate with authorities after receiving a settlement from Hardy.

While the charges have been thrown out and Hardy has asked that his record be expunged, the NFL doled out a heavy penalty that Hardy will appeal.

Hardy, viewed as the Cowboys' key free-agent signing because of his pass-rush ability, joined the team on a one-year deal in March that did not include any guaranteed money. His suspension doesn't take effect until Sept. 5, allowing him to take part in the Cowboys' offseason program.

Coleman joined the Cowboys last year as an undrafted free agent and was a Week 1 starter. He played in two games and was on the 53-man roster for 10 games before ending the season on the practice squad. He re-signed with the Cowboys after a longer-than-normal delay in part so he could look at other options.

Altercations like this are not that unusual, but Hardy's past and this week's suspension add to the story. Last year,Dez BryantandJoseph Randlehad a verbal back-and-forth on the practice field after it was learned Randlemadedisparaging remarks about previous legal issues involving Bryant andJosh Brentwhile being arrested for shoplifting at a local mall. Tight endJason Wittenquickly stepped in and ended the discussion.Randle later apologized.

The Cowboys are in Phase 1 of the offseason program that focuses on strength and conditioning. Players cannot do any on-field work with their position coaches or coordinators until May 4.