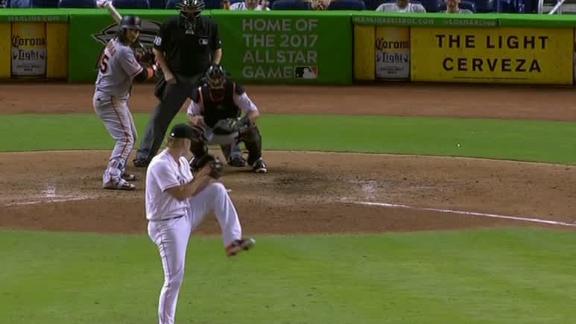 MIAMI -- Brandon Crawford became the first major league player in 41 years to get seven hits in a game, putting the San Francisco Giants ahead to stay with an RBI single in the 14th inning of an 8-7 victory over the Miami Marlins on Monday night.

Crawford tripled, doubled and had five singles in eight at-bats. The previous player to get seven hits in a game was Pittsburgh Pirates infielder Rennie Stennett on Sept. 16, 1975, at the Chicago Cubs.

Stennett set a modern-era record by accomplishing his feat in a nine-inning game. The only other player to do that was Wilbert Robinson for the old Baltimore Orioles of the National League in 1892.

Johnny Burnett holds the major league mark for an extra-inning game with nine hits for Cleveland in a 1932 contest that lasted 18 innings.