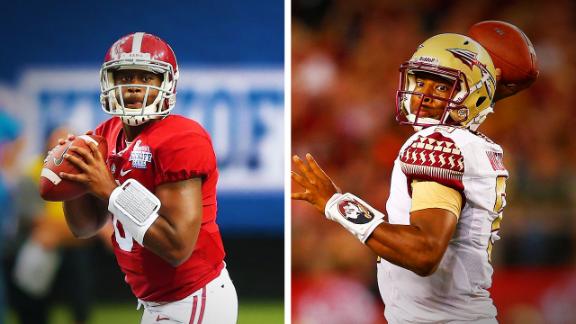 TUSCALOOSA, Ala. -- Alabama learned a lot from its season-opening win over West Virginia on Saturday, but it came at a cost as the Crimson Tide lost a pair of veteran starters for a significant amount of time.

Who will be throwing the football to White's replacement at receiver, though, remains unclear.

Saban committed to playing both Blake Sims and Jake Coker against Florida Atlantic on Saturday, but the coach wouldn't say how the two would share reps.

"When I figure it out, I won't tell you," Saban said with a smile.

Sims started and played all but a few snaps against West Virginia, completing 73 percent of his pass attempts. Coker came on late, handing the ball off a few times before the game ended.

Saban said Geno Smith and Maurice Smith are the options to start in place of Williams at the "star" position.

Though Robert Foster is listed on the depth chart as White's backup at the "Z" receiver position, junior Chris Black was the one who took his spot on offense against West Virginia.