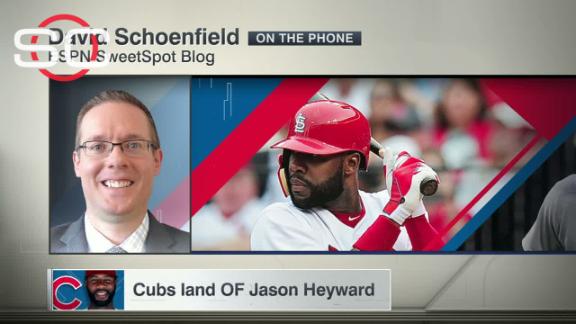 The Chicago Cubs have agreed to terms with free-agent outfielder Jason Heywardon an 8-year, $184 million deal, according to ESPN's Jerry Crasnick and multiple reports.

Heyward's deal has two opt-outs: One is after three years and the second is after the fourth year, according to multiple reports.

The Cardinals and Nationals were also in the hunt for Heyward, who played with St. Louis this past season.

According to a Fox Sports report, the Nationals bid $200 million for Heyward, and another team, believed to be the Cardinals, also offered $200 million, meaning Heyward took less money to play for the Cubs.

Arguably St. Louis' MVP last season, Heyward posted a WAR of 6.5, the most among Cardinals position players by a considerable margin. He also is one of the best in baseball in defensive runs saved and has won two Gold Glove awards.

Heyward finished his first season in St. Louis with 13 homers, 60 RBIs and a .293 average, helping the Cardinals to the NL Central title and the best record in baseball in 2015 at 100-62.

Heyward has stolen at least 20 bases in three of the past four seasons, including both of the past two. He's an efficient base stealer, swiping 43 of 50 since the start of 2014. The 86 percent success rate ranks eighth among those with at least 20 attempts in that span.

The Cubs plan to play Heyward in center field unless they move right fielder Jorge Soler in a deal. He'll bat near the top of the lineup as he and new addition Ben Zobrist give the Cubs an element on offense they were missing last season: contact. The Cubs led the majors in strikeouts but now possess a much more balanced lineup.

The 14th pick overall in the 2007 draft, Heyward finished second to Giants catcher Buster Posey in the rookie of the year voting in 2010, when he made his lone All-Star appearance.

The move to add Heyward comes after Zobristsigned a four-year, $56 million deal on Tuesday to replace Starlin Castro, who was simultaneously traded to the New York Yankees for right-hander Adam Warren.

Earlier in free agency the Cubs signed veteran right-hander John Lackey to a two-year deal worth $32 million.With Heyward and Lackey going to the Cubs, this is the first time ever that multiple free agents have gone from the Cardinals to the Cubs in a single offseason.

Information from ESPN's Jesse Rogers and ESPN Stats & Information was used in this report.