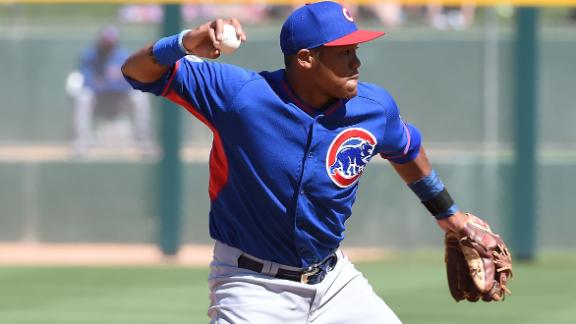 Cubs manager Joe Maddon said Tuesday on his weekly show on CBS Radio in Chicago that Russell would bat ninth Tuesday night against thePittsburgh Pirates. Russell was 0-for-5 with three strikeouts in an exciting, 9-8 comeback win.


"I really wasn't expecting it," Russell said of the call-up on Tuesday. "I went to Triple-A with the mindset that I was going to finish out in Triple-A and just handle my business here, but I'm excited."


Russell, ranked the No. 4 overall MLB prospect by ESPN's Keith Law, has primarily been a shortstop but moved over to second base recently in preparation for a promotion to the majors.


"You never know where the need is going to be on the major league level," Maddon said before the Cubs beat the Pirates 5-2 Monday night. "[We're] being a little bit more proactive regarding prepping him for a need that might be open here."


Russell was hitting .318 for Iowa this season, breaking up a perfect game against Oklahoma City on Monday.


His best position is shortstop, but with Starlin Castro there for the big league team, Russell will play second base.


"In my head, I kind of had that idea, I guess," Russell said. "I did whatever they told me to do. I just want to learn more about that position."


Russell said he is in the process of learning how things work at second base. The Cubs are ready to remain patient while Russell works things out with both his bat and his glove.


"I'm not worried about handling success. How do you handle failure?'' Maddon said Tuesday. "I think he can. We think he can. Part of it is need right now, the fact that is open and the fact we think he can handle it right now.''


According to ESPN Stats & Information, Cubs second basemen rank 29th in the league with a .135 batting average and last with a .355 OPS. Alcantara is hitting .077.


Russell, who will wear No. 22, is the second elite prospect the Cubs have called up in the past week.


Kris Bryant made his debut Friday and is hitting .444 in five games. He had three hits and three RBIs in Monday's victory.


CBSSports.com was first to report the Russell promotion.


Information from The Associated Press contributed to this report.