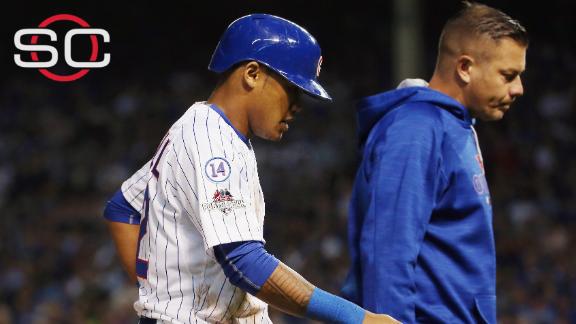 CHICAGO -- Cubs shortstop Addison Russell will not play in the National League Championship Series against theNew York Metsbecause of a strained left hamstring.

"He's not going to push it right now," Cubs manager Joe Maddon said Thursday afternoon during a workout at Wrigley Field. "Let's go on a normal pace with the training staff.

"Hopefully, if everything plays properly and we have another opportunity to play in another round, he might be available at that time, but for sure not this one."

Maddon also said Thursday thatJon Lester will start the series opener Saturday night, followed by Jake Arrieta in Game 2 on Sunday. Lester is 6-5 with a 2.66 ERA in 15 career postseason games, including 13 starts.

Russell left Game 3 of the NL Division Series against the Cardinals with tightness in his left hamstring. Maddon said it's a moderate strain and the team will be pragmatic with the injury.

By rule, if a player is on a playoff roster but has to be replaced mid-series because of an injury, he's not allowed back on the roster for the next round. The Cubs didn't want to take a chance of being caught short-handed or losing Russell for the duration of the playoffs, so his "moderate" hamstring injury will keep him from playing in the NLCS.

"This permits us to put it on a more planned situation regarding his rehab, and then we'll work it out from there," Maddon said. "I think he was relieved in a sense so he didn't have to push it right now."

Javier Baez, a2011 first-round pick,will take Russell's spot in the lineup. Baez took over for Russell in Game 3 against the Cardinals, committing a throwing error, but as a starter in Game 4, he hit a three-run homer to help the Cubs close out the series against St. Louis.

"The big thing with him is the consistency on defense," Maddon said. "We have to catch the ball. I know he can do that. It's a mental thing."

Baez is a huge talent who can play second, shortstop or third base while possessing a big swing that he's refined while spending most of the season in the minors. The drop-off from Russellmostly comes due to lack of experience. Russell has been a starter since being called up in April, while Baez came along in September.

"I want to believe Javy is arriving at the same point," Maddon said of him peaking. "To hit a three-run home run in a playoff game should boost your confidence."

Starting Lester in Game 1 gives Arrieta a much-needed extra day off. The right-hander tossed a shutout against the Pirates in the wild-card game last Wednesday then gave up four runs against the Cardinals in Game 3 of the division series.

"It's nice to give Jake an extra day," Maddon said. "It played out well. ... I'm comfortable they'll both be starters in two games possibly."

Lester would start Games 1 and 5, while Arrieta gets Games 2 and 6. Considering neither is slated to start a third game, it didn't matter who started which game this weekend and Lester has already been off extra time as he last pitched in Game 1 of the division series last Friday.

"Anytime you [can] give a guy an emotional and physical break you take advantage of it," Maddon said of Arrieta. "We've been pushing him pretty hard."

Maddon wasn't sure who would take Russell's place on the 25-man roster. Utility infielder Jonathan Herrera is a possibility, as is adding another pitcher.