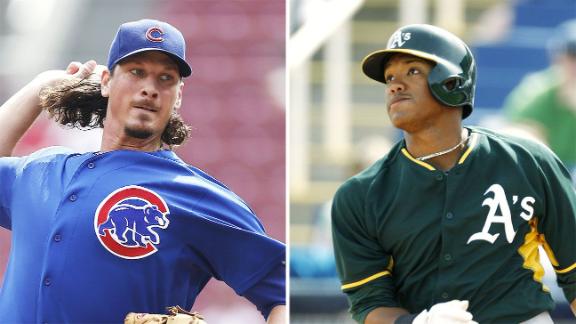 Hammel is set to become a free agent after this season, while Samardzija has one more year of arbitration before becoming a free agent.

Russell, 20, is ranked third among all prospects on ESPN Insider Keith Law's top 100 list. He plays shortstop, the same position occupied by current Cub Starlin Castro and top Cubs prospect Javier Baez. Russell has appeared in only 18 games this season due to a hamstring strain, hitting .333 in 58 at-bats at Double-A Midland. Current Cubs Triple-A hitting coach Brian Harper was on the staff of the Mesa Solar Sox of the Arizona Fall League last year when Russell was a member of the team.

Samardzija was drafted by the Cubs in the fifth round in 2006 and worked his way up from reliever to starter. He put together his best two months of his career in April (2.38 ERA) and May (1.38 ERA) but got little run support or bullpen help, leading to his 2-7 record. However, in June, his ERA was 5.45 as he went 1-3.

The Cubs and Samardzija had been talking on and off for two seasons about a contract extension but never got close to inking a deal. Samardzija wants to be paid full market value, although he's still a year and a half from free agency. The Cubs reportedly offered him a 5-year, $85 million deal that he rejected.

Hammel was pulled from his start Friday after just 92 pitches and told reporters he was confused as to why he was taken out of the game.

"I would have liked to have stayed out there in the seventh," Hammel told reporters after the 7-2 win. "I have no idea why I came out of the game. I honestly believe you learn how to pitch when you get to 100 pitches. If you're not allowed to reach that, I think that's hurting you more than help."

Hammel was aware he could be moved, recently saying, "I knew what I signed up for here." The Cubs have said they are in rebuilding mode, and Hammel is just the latest player on a one-year deal to be flipped for prospects.

With the trade, the Cubs' farm system got even better. It now boasts six of the top 75 position player prospects in baseball, according to Law's preseason rankings: Russell (No. 3), Baez (No. 7), outfielder Kris Bryant (No. 15), outfielder Jorge Soler (No. 26), outfielder Albert Almora (No. 28) and second baseman Arismendy Alcantara (No. 71).

The Cubs are solidly in last place in the NL Central at 38-46, while the Athletics currently have the best record in the major leagues at 53-33.

Athletics Bolster Rotation For World Series Run
Dallas Braden discusses the Athletics' acquisition of Jeff Samardzija and Jason Hammel, and the message Oakland GM Billy Beane is sending to his team with this trade.