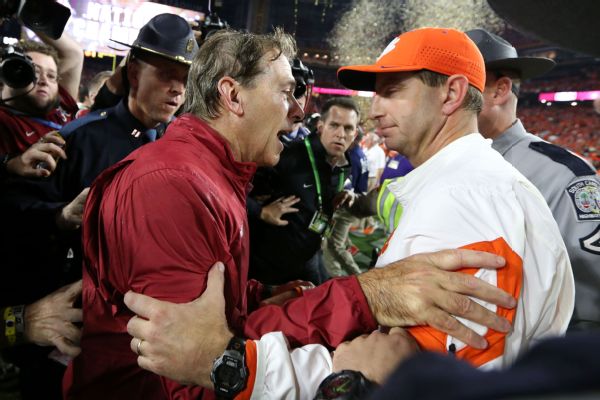 TAMPA -- As Clemson football coach Dabo Swinney sees it, no one has done it quite like Alabama coach Nick Saban.

On the eve of No. 2 Clemson's bout with top-ranked Alabama in the College Football Playoff National Championship Presented by AT&T, Swinney couldn't help but take a minute to commend Saban and the job he has done in his 10 seasons at Alabama.

"I've never seen anything like it," said Swinney, who lost to Saban's Crimson Tide in last year's College Football Playoff National Championship. "I mean, obviously, I grew up, [former Alabama] Coach [Paul 'Bear'] Bryant was a hero of mine, and everybody here knows about Coach Bryant. But with what Coach Saban has done, the amount of championships in the span of time with scholarships, it's just incredible. I really have no words, because it's really hard to do.

"He's changed college football. I mean, he really has been a pioneer and changed a lot of the way things are done in college football, in building infrastructure, which I think are great, because now you have young people that have lot more resources. They have a lot more people trying to help them be successful. Just incredible, the run that they've had, no question."

Alabama is currently riding a 26-game winning streak.A victory on Monday would give Saban his sixth national championship, tying him with Bryant -- the standard-bearer for Alabama football -- for first all time nationally.

Monday will also mark Saban's 50th career game coaching Alabama as The Associated Press No. 1 team, the most games (44-5) coached as No. 1 at one school.

"He's worked really hard -- every year is kind of that season of its own, and you have your challenges, and it's a journey of its own," Swinney said. "But to be able to regroup and create that edge and meet those challenges, continue to manage your staff and your roster and compete at the highest level, I mean, it's just unbelievable what has happened."

SEC commissioner Greg Sankey praised Saban's Alabama accomplishments, and while he compared the Tide's run of four national championships in the past six years to the championship run UCLA's men's basketball program had when it won 10 national titles during a 12-year stretch from 1964 to 1975, he said he would not use the word "dynasty" to describe Alabama's success.

Sankey wasn't taking anything away from the Tide's achievements under Saban, but he does think that the league is growing stronger behind Alabama's banner and doesn't consider the SEC, which went 6-8 against Power 5 opponents during the regular season and was the only Power 5 conference to have just one double digit-win team (Alabama), to be a one-team league.

"Right now, Alabama's been on a great run of success, and you have to recognize that, but I know our other programs are strong," Sankey said. "And we've seen improvement.

"The notion that somehow a program winning a number of championships consecutively is bad for college football is not something I accept."

Saban might have been the man of the hour, but he wasn't going to leave his final media obligation before Monday night's title game without showering Swinney, who actually walked on -- or crawled on, as he put it -- at Alabama in 1989, with his own praise.

"I think Dabo has done an outstanding job of managing the situation that he's in, in a very competitive program that he's done a great job in," Saban said. "But he has also been very supportive of his teammates that he played with at the University of Alabama, Coach [Gene] Stallings -- you know, Coach Stallings does a lot to try to raise money for Rise. Dabo comes back, we both try to sort of do everything that we can do to support that and help that.

"I really appreciate the way he has managed his loyalty to his alma mater, but done a great job at Clemson at the same time, and never seems to be in conflict." 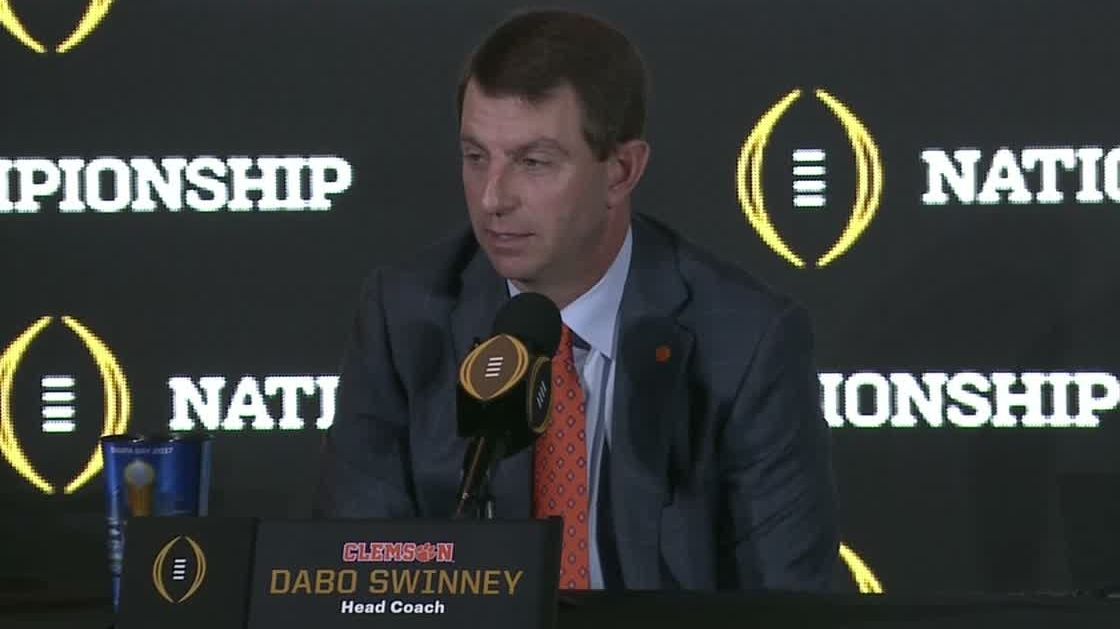