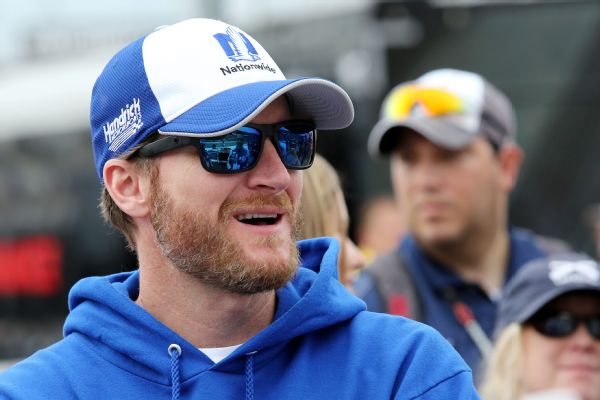 CHARLOTTE, N.C. -- Dale Earnhardt Jr. admits he took his job for granted and in some ways took what life had to offer for granted as he looks ahead to getting back to racing in 2017.

Earnhardt missed the final half of the 2016 season because of a concussion, and his perspective on life has changed since getting out of the car in July. He has a new outlook on his racing career.

"You take your job for granted when you are doing it every week," Earnhardt said Wednesday in meeting with reporters during NASCAR's preseason production days. "This is a society where we get better and better at complaining.

"Drivers aren't any different. We moan and complain about everything. ... [It] showed me how much I've got going for me and how fun this really is. You can make it really difficult or you can enjoy it."

The 42-year-old Hendrick Motorsports driver has little to complain about. Not only is he healthy, he just returned from his honeymoon last week as he capped his eventful 2016 by getting married New Year's Eve to Amy Reimann.

Earlier in December, Earnhardt tested at Darlington Raceway and got approval to return to racing. For more than two months after a hit at Michigan in June resulted in a concussion, he had battled balance issues and gaze stability plus the ability to focus on objects in the distance while moving. The final step of his rehab was driving a car at Darlington with doctors examining him throughout the day.

"To get approved to race is one thing, but to decide to race is another," Earnhardt said. "Mentally, you have to make the decision if you want to keep racing. ... I had to answer a lot of personal questions of myself and just really buy in.

"All that was a big process and I'm really happy with what I've decided to do."

There were times during his recovery that he wondered if he would be allowed to race again.

"I got real close to not being able to compete," Earnhardt said. "It got real close to being someone else's decision whether I competed or not. People have asked me ever since I turned 40 when I would retire, and all I wanted to do was to be able to make that choice myself.

"I don't know when I'm going to stop racing. But I want to be able to make that choice and not have it made for me."

Earnhardt began discussions with team owner Rick Hendrick about a contract extension before his injury. Those talks were pretty much put on hold until his return, and Earnhardt didn't give any indication that he was ready for 2017 to be his final season.

"I'm just hoping to enjoy what's left of my career," Earnhardt said. "Hopefully I get to make the decisions on that myself as far as how much further I race and I'm going to start a family and all that good stuff too.

"I've got a lot of things to look forward to. I'm really excited about my future."

His future, on a personal level, he feels is set.

"Getting married has been incredible," Earnhardt said. "I wish I had figured all this out sooner. I'm frustrated with myself that I took so long to grow up because I've got an amazing wife and she's changed my life.

"She's really helped me as a person to become better on all fronts, personally in all my friendships and relationships, how I react with people and treat people. And obviously in my professional life, she has helped me as a driver."