Dale Earnhardt Jr. interested but not involved in Panthers purchase 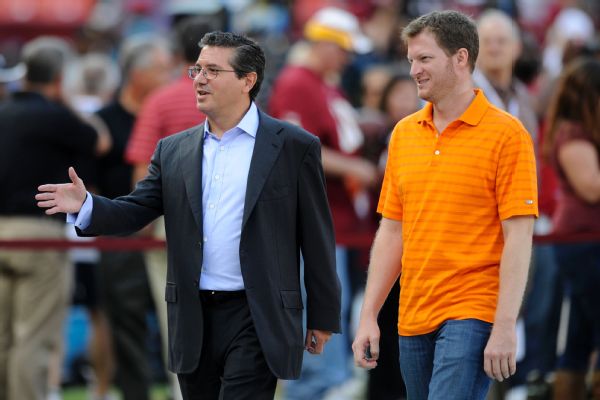 CHARLOTTE, N.C. -- Dale Earnhardt Jr., retired as a full-time driver in NASCAR's top series, has an interest in being a minority owner of the Carolina Panthers.

The sports' 15-time most popular driver told The Associated Press that he recently called Marcus Smith, the president and chief operating officer of Speedway Motorsports Inc., about potential involvement in purchasing the Panthers.

The subject came up when Earnhardt was asked whether he was involved with a group headed by Charlotte businessman Felix Sabates, a minority owner with Chip Ganassi Racing, to buy the team from Jerry Richardson.

Sabates told The Charlotte Observer last week that two NASCAR drivers were involved with his group. Sabates also said he'd been in contact with Smith about joining his group planning to make a bid.

A source close to the situation told ESPN that current interest by the Smith family, which also includes SMI owner Bruton Smith, isn't connected with the Sabates group.

But the source said the Smith family is interested in purchasing the Panthers.

"[Felix] did not ask me to be involved," Earnhardt told the AP when discussing his plans to be involved in Winter Olympics coverage with NBC. "I did call Marcus and I said, 'Hey, Marcus, if you guys are in the middle of it and you think it's a good business deal, I definitely have some interest.' But I am not one of the guys that Felix is talking about."

Earnhardt, according to Forbes, has a net worth of about $300 million. A big Washington Redskins fan, he made it clear he would be nothing more than a minority owner if he became involved.

"I wouldn't have the kind of money where I would move the needle too much, but it would be something to have a lot of pride in, and a good Charlotte NFL team is good for the city of Charlotte," Earnhardt said. "I wish them success because of what it does for our community, not only from a pride standpoint but [from] an economical standpoint. I wouldn't be a big player, and it wouldn't be an investment that would really create a big change in my life.

"But I certainly would love to be supportive to the team and the success of the team to the community. That means a lot to me."

Richardson announced last month that he would put the team up for sale after the season. He made the decision hours after the NFL announced it was investigating Richardson for workplace misconduct.

According to a story in Sports Illustrated, Richardson reached a financial settlement with at least four former employees to cover up claims of sexual harassment and the use of a racial slur with a former team scout.

Since announcing the team would be sold, several celebrities have expressed interest, including two-time NBA MVP Stephen Curry, a native of Charlotte, and rapper Sean "Diddy" Combs.

But neither have the net worth to be a majority owner.

Forbes recently valued the Panthers at $2.3 billion. A new controlling owner would be required to individually own at least 30 percent of the team, which would require an investment of $690 million at the organization's current value.