Dale Earnhardt Jr. says decision to donate brain was an easy one 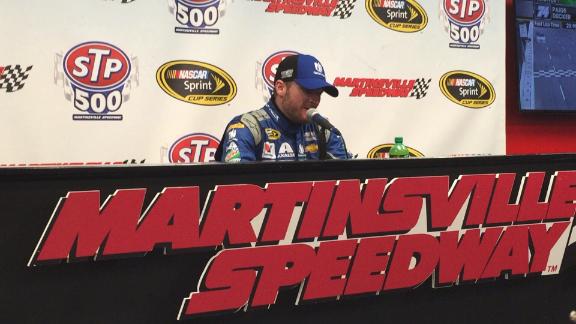 "I was a donor already for many years ... and so it seemed like a reasonable thing to do for me," Earnhardt said Friday of his decision. "Anything I can do to help others. Hopefully the science has advanced far beyond what it is today and they don't need it.

"It was something I didn't have to ask myself whether I wanted to do it or not."

After retweeting a story on Saturday about three former Raiders pledging to donate their brains in honor of former quarterback Ken Stabler, Earnhardt began to research just how he would go about donating his brain. Stabler died in July and was found to have Stage 3 chronic traumatic encephalopathy, or CTE, the disease linked to repeated blows to the head.

Earnhardt, who made national news with the tweet about planning to donate his brain, has talked with people at the Concussion Legacy Foundation in partnership with Boston University about the process and hopes to visit the scientists there when the NASCAR Sprint Cup Series competes in New Hampshire this summer.

"I just thought that was amazing that those guys did it in honor of their teammate, and I read where Brandi had done that maybe a month ago," Earnhardt said. "That was really inspiring. ... I didn't expect it to turn into the story it did, but if by all means, if it raises more awareness and inspires people to donate their brains and pledge their brains -- they don't need just athletes. They need everybody.

"I'm going to give up all the organs that are worth anything when it's over with. So they can have it all."

The Hendrick Motorsports driver -- and arguably NASCAR's most popular driver the past 13 years -- might be one of the more knowledgeable of his colleagues when it comes to concussions, as he missed two races in 2012 after suffering two concussions over a two-month period.

The two concussions were different. Earnhardt's first concussion, suffered in August 2012 when he crashed into the wall after having a tire blow out during a Kansas test, was more of a typical concussion that caused him to be foggy. The next one, in October that year, happened when he was tagged and spun around quickly a few times, causing an injury around the brain stem. That concussion caused severe anxiety that spurred him to visit doctors and resulted in his missing two races.

Earnhardt spent time with Dr. Michael Collins at the University of Pittsburgh Medical Center Sports Concussion Program. Collins developed the ImPACT neurological assessment tool that athletes take to determine whether an they should return to action after a concussion.

"[The doctors] gave me the confidence going through that process that I could be successful and get through it, and I have," Earnhardt said. "I've been healthy and successful and learned a ton. I might be a better race car driver today."