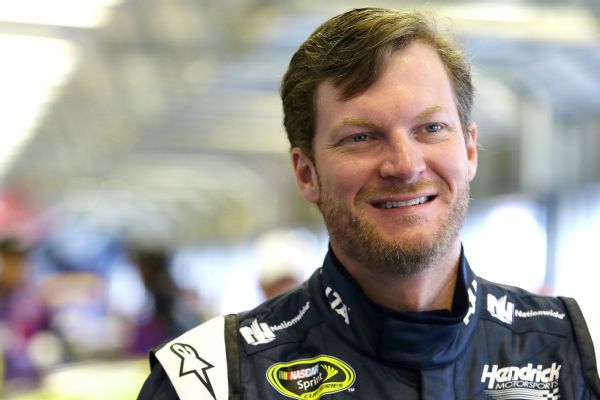 Dale Earnhardt Jr.completed a test session Wednesday at Darlington Raceway and suffered no concussion symptoms, clearing him to race at the start of the 2017 NASCAR season.

"I feel great, and I'm excited to officially be back," Earnhardt said in a Thursday news release. "I expected things to go really well yesterday, and that's exactly what happened. Actually getting in a race car was an important final step, and it gives me a ton of confidence going into 2017."

"Dale is one of the hardest-working patients I've ever encountered," Collins, considered an authority on the treatment of concussions, said in the news release. "He's done everything we've asked, and we believe he is ready to compete at a professional level again and can withstand the normal forces of a race car driver.

"Dale has been very open with us, and we've had plenty of time for his treatment, so we feel very good about his long-term prospects and how this has been managed by everyone involved."

Earnhardt, 42, will drive Jan. 31 and Feb. 1 in a NASCAR test at Phoenix International Raceway, open to one car from each organization. NASCAR created a rule this year that allows a driver coming back from injury to test a car, as long as there are no data acquisition systems that would give the team an advantage.

Earnhardt and team owner Rick Hendrick have scheduled a teleconference for 11 a.m. ET Friday to discuss the driver's return.

Earnhardt missed the final 18 races of 2016 because of a concussion suffered in June at Michigan International Speedway, the effects of which he said he did not start to feel until about a month later. He had battled nausea, balance and vision issues, which did not begin to significantly clear until August.

He has spent more than 15 hours in a racing simulator during his recovery. He said last week that before his concussion he would get sick in the simulator, but that he had not experienced those symptoms recently.

Earnhardt said the decision in August to not race again this year helped him recover, because he stopped stressing over when he would get back in the car.

"You worry about your health," Earnhardt said Friday at the NASCAR Sprint Cup Awards. "You worry about the issues you've got are permanent or when they are going to get better and how.

"Anxiety is a huge factor with concussions and can be a major problem with people trying to recover. ... Every day, I was in some sort of discussion about my future, and my doctor told me I couldn't get well until I dropped all that and didn't think about it. I thought, 'How am I supposed to not think about that? That's the most important thing in my life.'"

Earnhardt's first race back will be the Feb. 23 qualifying race for the 2017 Daytona 500. He will not participate in The Clash preseason event.Alex Bowman, who along with Jeff Gordon substituted for Earnhardt this season, will drive in that event.

"Alex did such a great job in the car this year, and I felt like he deserved another opportunity," Earnhardt said. "When I spoke with Rick and the team about him driving The Clash, everyone agreed that he more than earned it, and [sponsor] Nationwide was 100 percent on board.

"I'm really grateful to him and Jeff for what they did for our team, and I'm glad Alex is getting another run with us."