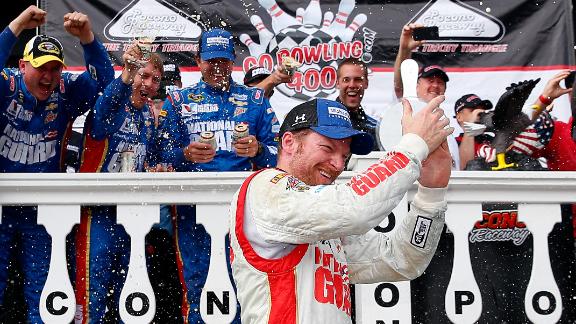 That's one for every win.

He added a new wrinkle at Pocono, a broom.

Earnhardt hoisted the broom high over his head after he completed a season sweep at Pocono Raceway, the third win in a season that has served as a career renaissance for NASCAR's most popular driver.

Earnhardt now holds the No. 1 seed in the Chase for the Sprint Cup championship.

Can he hold it headed into NASCAR's version of the playoffs?

"You're the broadcaster," Earnhardt teased crew chief Steve Letarte about that question.

"You don't," the departing Letarte said. "You're too far from the Chase."

The legion of Junior Nation fans roared when Earnhardt stormed ahead of the pack off the final restart with three laps left for the lead. His third win, he also won the Daytona 500, tied him for the most in Sprint Cup this season.

Earnhardt held off the hard-charging Kevin Harvick to become the first driver to sweep both races at the track since Denny Hamlin in 2006.

He tweeted "Lookin for a broom" last week when he landed in Pocono.

He found one in Victory Lane.

"This group all really enjoys each other," Earnhardt said. "We want to see everybody happy."

They had tons of fun inside the Pocono media center.

Letarte acted hurt when his nameplate didn't have the same three winner's stickers that were on Earnhardt's card. Earnhardt also brought a Make-A-Wish Foundation teen to the podium and made sure he'd have his own namecard and stickers.

"This is my buddy, Chris. Does he get one," Earnhardt said.

They all got their stickers -- the same ones applied to the No. 88 Chevrolet.

Earnhardt also became the fifth straight Hendrick Motorsports driver to win at Pocono. Owner Rick Hendrick was not at the race, though he did talk to his winning driver on the phone on pit road.

"I told him thanks for believing in me and making my life better," Earnhardt said.

Earnhardt has his most wins since he won six times in 2004. His three wins are one shy of his combined total from 2005-2013. His win Sunday was the 22nd of a career still without a Cup championship.

"We had a fast car all day," Earnhardt said. "Steve's strategy was perfect at the end. I don't know if anyone knew what was going on there, but it was pretty awesome."

Earnhardt said before the race his No. 88 Chevrolet was better than his winner in June. They were both fast enough to take the checkered flag. He had a bit of luck in his first win when debris slowed down race leader Brad Keselowski. On Sunday, no one could touch Earnhardt over the final 14 laps.

"We were determined to go home from the last win and improve the car," he said.

Earnhardt and Letarte are clicking in their final season together. Hendrick Motorsports named Greg Ives the crew chief for 2015 once Letarte heads to the broadcast booth.

"I think he's going to make me look bad," Letarte said. "Mr. Hendrick has a remarkable talent of matching drivers with crew chiefs."

Harvick, who clinched a spot in the Chase, was second, followed by Joey Logano, Clint Bowyer and Greg Biffle.

Gordon finished sixth a week after he won the Brickyard 400. He led a race-high 63 laps and passed 24,000 career laps led in the No. 24 Chevrolet and 1,000 laps led at Pocono. He still holds a 17-point lead over Earnhardt in the standings. Earnhardt would have the No. 1 seed because he was one more win than Gordon.

Earnhardt, who swept a track for the first time since Talladega in 2002, had few cars left to hold off on the lead lap after several potential contenders got knocked out.

Hamlin triggered a 13-car wreck with 43 laps after he got sideways coming out of a turn. Brian Vickers tried to avoid Hamlin and slammed into Matt Kenseth to send cars all over the track. The pileup looked like a "Big One" straight out of Talladega or Daytona, with smoking, dented and destroyed cars littering the track. Tony Stewart's No. 14 Chevrolet rested atop Paul Menard's No. 27 Chevy.

"I can't drive it because my car is on top of the other car," Stewart said over the radio.

"Big wrecks are always frustrating when you're in it," Kenseth said.

Aric Almirola said he slammed on the brakes as hard as he could, but still got "creamed from behind and pushed into the wreck."

Hamlin was able to straighten himself out and stayed out.

Kyle Busch topped the lengthy list of stars with an early exit when the No. 18 needed a push to the garage with a variety of issues. Six-time champion Johnson finished outside the top 10 for the fourth straight race. He fell a lap down after his rear right tire smacked the wall, rebounded to run fifth, then a second blown tire forced him to the garage.

"It wasn't the best weekend but we still gave ourselves a chance at a win, if not a top five, today and came up a little short," Johnson said.

His teammate carried the Hendrick banner all the way to victory.

"After last year, I thought the only thing we're not doing is winning," Earnhardt said.

Dale Earnhardt Jr.'s Sunday Convo Part 2
Dale Earnhardt Jr. talks about overcoming his struggles, driving for Hendrick Motorsports while he struggled and how his personal and professional life are working together.