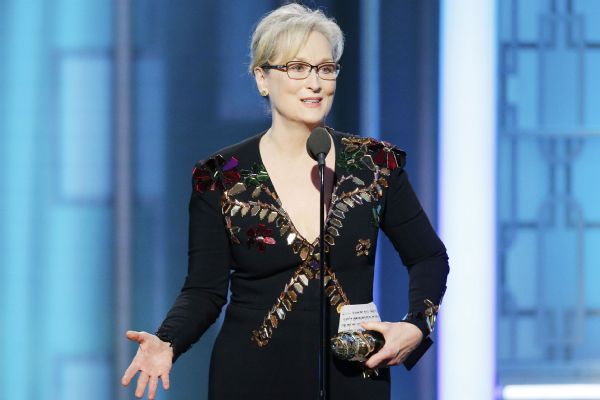 Streep's speech was aimed at U.S. President-elect Donald Trump and his mimicking of a disabled news reporter, but it also included a brief shot at the sport of MMA.

While making a point about diversity in Hollywood, Streep said, "If we kick [outsiders and foreigners] out, you'll have nothing to watch but football and mixed martial arts -- which are not the arts."

UFC president Dana White responded to the dig in an interview with TMZ Sports.

"It's not going to be everybody's thing, and the last thing I expect is for an uppity 80-year-old lady to be in our demographic and love mixed martial arts," White said.

"Of course it's an art," White added. "These fighters, these men and women, are so talented. They train their whole lives to be the best in the world. To say something stupid like that is like saying, 'She's not a talented actress,' which she is. She's a very talented actress."

Bellator MMA president Scott Coker also weighed in on Streep's comments, inviting her to his promotion's next event on Jan. 21 in Los Angeles. Coker made the invitation in an open letter to Streep that was posted on social media.

"I'm a lifelong fan of your work but also a lifelong martial artist who happens to promote mixed martial arts around the world," Coker wrote.

"The global sport of mixed martial arts celebrates male and female athletes from all around the world who work years tirelessly honing their craft and -- yes -- art. They come from every country and every walk of life. We at Bellator support them and honor their skill.

"Please be my guest at the LA Forum on January 21st and you will see that mixed martial arts is truly artistic -- which will feature fighters from all over the world competing at a world class level."

The president-elect also reacted to Streep's comments, calling the three-time Academy Award winner "over-rated" as part of a series of tweets Monday morning.