Danny Ferry out in Atlanta; Mike Budenholzer to be coach/president 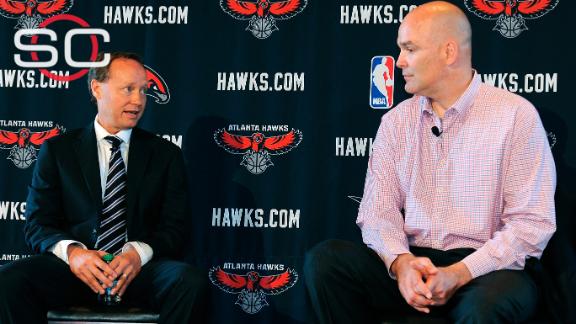 The Hawks' board of managers will hold a conference call Friday morning to approve the terms of Ferry's buyout. League sources say it will include an amount greater than the balance of Ferry's current contract, which has three additional years remaining. The Hawks' current ownership group will assume responsibility for the cost of the buyout.

Entrepreneur Antony Ressler agreed to purchase the team in April for what sources said is $850 million, including debt obligations. The deal that is expected be finalized June 24, when the NBA Board of Governors meets.

League sources say potential buyers groups, including Ressler's, were deeply impressed with Wilcox's hour-long presentation on the team's strategic plan moving forward . The incoming ownership group also regards Budenholzer, who enters the final season of his three-year deal this summer after leading the Hawks to their most successful season ever in Atlanta, as one of the franchise's top assets.

Budenholzer capitalized on that success to become one of only five head coaches in the NBA to hold both the title of head coach and top basketball executive, joining his mentor, Gregg Popovich of the San Antonio Spurs, Doc Rivers of the Los Angeles Clippers, Stan Van Gundy of the Detroit Pistons and Flip Saunders of theMinnesota Timberwolves.

Ferry took a leave of absence from the Hawks on Sep. 12 after a recording of him making insulting comments about Luol Deng on a conference call were made public. Since Ferry's departure, Budenholzer has presided as the head of basketball operations, with Wilcox also active in day-to-day proceedings as assistant GM.

On the call, Ferry, who has maintained he was reading from a scouting report prepared by a third party, characterized Deng as a player who "has a little African in him," and added, "He's like a guy who would have a nice store out front and sell you counterfeit stuff out of the back."

Days before the recording of Ferry became public, an email written by owner Bruce Levenson in 2012 that was found in the investigation surfaced that expressed concern that large numbers of African-American spectators at Hawks games were driving away more affluent, middle-aged white suburban fans.

In response to the turmoil, Levenson and his Washington-based partners put the Hawks up for sale. Levenson has not spoken publicly since the incident.

Hawks to buy out Ferry, promote coach
Kevin Arnovitz reacts to the report that the Atlanta Hawks have reached a buyout agreement with general manager Danny Ferry and that current coach Mike Budenholzer will assume the role of head of basketball operations under the title of team president.