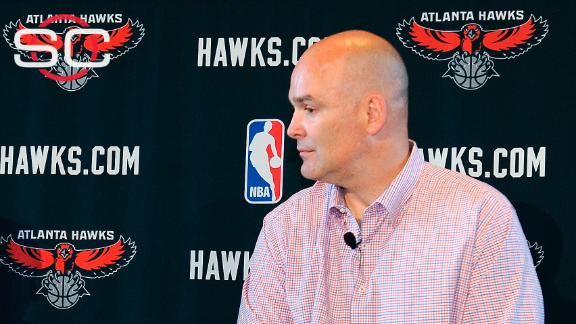 Danny Ferry, who officially stepped down as general manager of the Atlanta Hawks on Monday, told ESPN he has mixed emotions about leaving the team, but is relieved that he and the franchise can now move forward.

Ferry's departure ends a 10-month indefinite leave of absence that followed the release of an audio recording of a conference call with ownership in which Ferry was heard repeating culturally insensitive comments from a scouting report about Miami Heat forward Luol Deng.

"I have mixed emotions, but it's good to have the situation resolved and to be moving forward," Ferry told ESPN in his first public comments on the situation since last September. "We've been together for three years. I'll miss being part of it. But I'm also happy for the people who are getting opportunities to move forward. So it's mixed emotions for a lot of reasons."

ESPN.com's Kevin Arnovitz reported on June 18 that Ferry and the team had agreed to a buyout that will pay Ferry more than the remaining balance on the final three years of contract, according to league sources.

Coach Mike Budenholzer will assume the role of head of basketball operations under the title of team president, while assistant general manager Wes Wilcox will be elevated to general manager, sources said.

Ferry told ESPN that he considered the possibility of coming back to his job at various points throughout the season, but "didn't want to be a distraction" for the Hawks, who won 60 games and placed four players on the All-Star team this season, or for Deng.

ESPN reported this past weekend that the law firm hired by the team -- Alston & Bird LLP -- conducted 19 witness interviews and reviewed the contents of more than 24,000 emails and found no evidence that Ferry's comments on Deng were motivated by bias.

On the call, which occurred June 6, 2014, Ferry characterized Deng as a player who "has a little African in him," and added, "He's like a guy who would have a nice store out front and sell you counterfeit stuff out of the back." Ferry has maintained he was reading from a scouting report prepared by a third party.

In documents obtained by ESPN over the weekend, Bernard Taylor, the lead investigator for Alston & Bird, supported Ferry's assertion.

"We reported the results of our work to the Hawks," Taylor wrote in a letter to Ferry. "In summary, the facts indicated that you repeated comments that were not your own about Mr. Deng from a scouting report during the call, and there was no evidence to indicate that during the call you acted in a manner motivated by negative bias toward Mr. Deng."

An overview of the law firm's findings was reported to Atlanta's ownership Sept. 10, though the firm didn't produce a written report. Ferry remained on an indefinite leave of absence following Taylor's findings. The team's release and the letter from Taylor were formally written as a condition of the settlement.

Ferry had requested a statement to that effect in September.

When asked why it wasn't released sooner, Ferry said: "In September, Bernard Taylor gave his findings to the team. So you're going to have to ask them that.

"I do know that a guiding principle for everyone in this was the sale. Getting the team up for sale took a lot longer than everyone anticipated. I think initially everyone was hoping to have the sale done quickly, but because it was a struggle to figure out what was actually for sale and getting the team actually up for sale, the team didn't actually go to sale really until January or February. That's not what I was expecting. But it's the way that it unraveled and it certainly pushed everything back for everybody."

Entrepreneur Antony Ressler agreed to purchase the team in April for what sources said is $850 million, including debt obligations. The deal is expected to be finalized Wednesday, when the NBA board of governors meets.

In his interview with ESPN on Monday, Ferry declined to name who wrote the scouting report he read from during the conference call.

"I know you have to ask, but just like a reporter has sources, we have scouting reports that are done under the idea that they're confidential," Ferry said. "I certainly made a mistake, but it's not something that characterizes who I am."

Ferry said he's spoken to and apologized to Deng for what was said and for involving him in the situation. In an interview with ESPN's Michael Wallace in February, Deng said he had accepted the apology and challenged Ferry to bring some good from the controversy.

"A lot of people experience racism at different times on different terms," Deng said. "It's helped me from a young age to have a tough skin. I've been through a lot where I just look at it and say, 'It's another chapter. We've come out of much worse than this.'"

Ferry said he took a trip to Senegal to participate in an NBA-led coaches clinic, and has spoken with prominent African-born NBA players such as Dikembe Mutumbo and Toronto Raptors executive Masai Ujiri to better understand the situation.

He also met with civil rights leaders in Atlanta. One of those men was former Atlanta mayor Andrew Young, who subsequently advocated for Ferry to return to the Hawks.

"It really is unfortunate," Young told ESPN, when asked about the resolution to the situation. "What I think of the whole situation is that a basketball disagreement ended up being cast as racial.

"I think it was totally unfair to characterize his statements as racial. Winning in sports is 90 percent from the neck up. If general managers cannot analyze egos and personalities and talk about the subtleties of a player, they can't do their job. The fact that Danny recommended Luol Deng [as a free agent the Hawks should sign] was in and of itself an indication that there wasn't a racial bias.

"Danny's father brought Manute Bol [who, like Deng, is Sudanese] to the NBA. When Danny was 16, he had to drive him around and be his chauffeur."

In its release announcing Ferry's departure, the team characterized Ferry's remarks as "a brief portion of a lengthy conference call without team ownership in which Ferry repeated and paraphrased language form a third-party scouting report" and added that later on the call, Ferry "recommended him both personally and professionally and ultimately tried to sign him to the team." The team also said that "the investigation revealed no other negative information on Ferry."

Ferry has continued to live with his family in Atlanta throughout the year.

"Early on I had a lot of anxiety, not just for me but for my family," Ferry told ESPN. I have five kids, a wife, a dad and a mom. I felt for all of them as well. But I think it's for other people to judge, but hopefully they look at my whole life and my career throughout 30 years in the NBA and the people who have spoken up for me. Hopefully that influences opinions about me and not as much the one mistake."

Days before the recording of Ferry became public, an email written by former controlling majority owner Bruce Levenson in 2012 surfaced, in which Levenson expressed concern that large numbers of African-American spectators at Hawks games were driving away more affluent, middle-aged white suburban fans. The email was found during the investigation of Ferry's remarks.

In response to the turmoil, Levenson and his Washington-based partners put the Hawks up for sale. Levenson has not spoken publicly since the incident.

After the initial chaos and controversy, the Hawks went on to have their most successful season ever in Atlanta, losing to the Cleveland Cavaliers in the Eastern Conference Finals.

"This season has proved two things," Hawks CEO Steve Koonin said. "First, Danny Ferry is a tremendous GM. Danny was the principal architect of the Hawks' success in Atlanta. From the hiring of Coach Bud to reinventing the roster, Danny's vision has put us in the tremendous place we are today. Danny acted with integrity and professionalism as he guided the organization through important changes over the last few years.

"Second, Danny Ferry is not a racist. Danny showed great leadership in stepping aside in the fall so the season could proceed with as few distractions as possible. He has always put the team first despite the great personal difficulties he endured. Now that the team has identified new ownership, the resolution of Danny's contract with existing ownership is appropriate. We wish Danny and his family only the best moving forward."