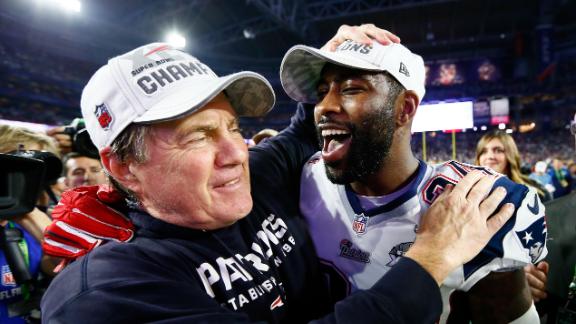 New York Jets cornerback Darrelle Revis, whose departure from the New England Patriots is being investigated by the NFL, will rejoin his former teammates next Thursday for the traditional Super Bowl celebration at the White House, a league source confirmed Thursday.

It might be a bit awkward, considering the intense AFC East rivalry and the Revis tug-of-war that occurred after the season. It resulted in tampering charges being filed by both teams. The charges are still pending.


The Patriots accused Jets owner Woody Johnson of tampering when he said at the end of the season that he'd welcome a Revis return. At the time, Revis, who played with the Jets from 2007 to 2012, was under contract with the Patriots.


Before free agency started, the league dispatched an investigator to the Jets' facility to check into possible tampering. A few days later, Revis, who became a free agent when his option wasn't exercised by the Patriots, agreed to a five-year, $70 million contract with the Jets.


"A no-brainer," Revis said of the decision to leave the Patriots after only one season.


Patriots owner Robert Kraft spoke of Revis' departure last month at the league meetings. They were innocuous comments, but they prompted the Jets -- in a payback mood -- to file their own tampering charges.


A profane exchange with a Patriots fan, including derogatory remarks about the Patriots, appeared last weekend on Revis' Instagram account. He claimed he was hacked.


The Patriots are accustomed to White House trips -- it's their fourth Super Bowl title -- but this is Revis' first championship.